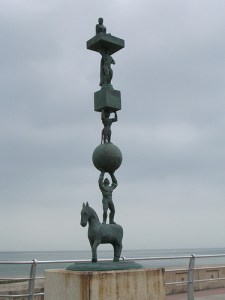 A bill proposed in the British House of Commons this week calls for more rigorous licensing from scrap metal dealers to prevent the theft of “high value metals,” from train rails to public sculptures and everything in between. According to Artlyst, with the rising price of copper, “public works of sculpture [are] stolen and smelted.”

Here’s what they have to say about the recent theft of a high profile sculpture that was stolen and sold as scraps:

“The latest valuable Bronze to be stolen was created by the Pop Artist, Sir Peter Blake who is best known for his innovative album jacket for The Beatles, ‘Sergeant Pepper’s Lonely Hearts Club Band’. “Life as a Circus” features a variety of circus acts cast in bronze standing on top of each other, and celebrates the circus tradition of the resort.”

Of course, thieves are not limiting themselves to just sculpture. The Daily Mail reported, with characteristic sensationalism, that a woman fell 20 feet into a sewer after its drain cover was stolen and, allegedly, sold for scrap metal. She survived the fall with only minor cuts and bruises, but Artlyst reminds us of Henry Moore’s sculpture Reclining Figure, which didn’t fare so well. It was worth more than a million pounds and police believe parts of the stolen piece were melted down and sold to a scrap metal dealer for about $2,500.