The photos down on Wall Street (via Gothamist)

Someone named Erin is not having a good day: a portion of Wall Street’s subway station has been plastered with blown-up images of her Facebook page and her iPhone texts. According to Jen Carlson at Gothamist, the collage was allegedly made by her angry ex(?) husband Philip, but even they are doubting the validity of the art.

According to CBS News (which is now getting its tips from Gothamist), the notes read ““I wish I hadn’t said I loved you that night” and “I can’t stop smiling because I’m making plans to cheat on my husband.”

Though the question isn’t really “Is this legit or a viral marketing advertisement?” It’s “What viral campaign is this for?” Ms. Chung speculates a dating site. (The world’s most horrible dating site, apparently.)

But the Post Secret-y feel of the images makes us think it’s either an MTV show or just a really weird installation. After all, when would “Philip” have time to create this project without the constant police presence around Wall Street and its subways noticing the graffiti? This smells like an TV executive’s idea of a “savvy” marketing campaign. (Look at how Skins and Gossip Girl was promoted!) But time will tell. While we’re waiting though, feel free to post your thoughts on the subject. 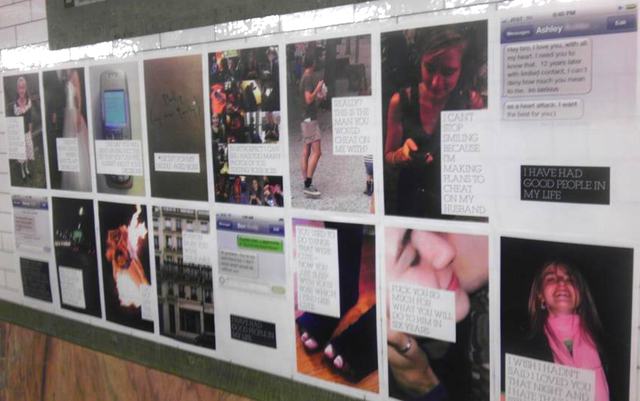