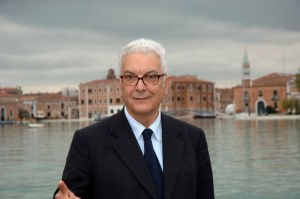 With the resignation of Italian prime minister Silvio Berlusconi over the weekend, power is in flux in the nation’s cultural institutions. Giulio Malgara, a favorite of Mr. Berlusconi, recently withdrew his candidacy for president of the Venice Biennale Foundation, and, according to The Art Newspaper, there are rumors that the biennale’s current president, Paolo Baratta, whose reign is set to expire in December, may be appointed to another term, or named culture minister in the new Italian government.

As all of this unfolds, The Art Newspaper had a long, detailed chat with Mr. Baratta about his experiences at the biennale. It is a remarkable read, offering a fascinating glimpse at the operation of, and recent changes at, the world’s most prestigious art exhibition. Below, a few highlights from the chat, in which he makes a persuasive case for his continued involvement in Italian culture.

Since participation in the biennale can send an artist’s prices soaring, the paper asks how the president avoid conflicts of interest. His reply:

“Since I was appointed president of the Biennale Foundation, I have stopped buying contemporary art works.”

Unlike many other international exhibitions and art fairs, the curator of the biennale is selected by the president, not a committee of experts. Mr. Baratta would not have it any other way, telling the paper:

“Committees are all too often appointed to make compromises, not real decisions. … The artistic director has total independence, except as regards the budget, which is subject to strict on-going controls. It is no coincidence that for many years the Venice Biennale has been the only Italian institution able to balance its budget.”

Discussing that budget, he notes that a full 90 percent of revenue comes from admission charges to the biennale exhibition. Some money also comes from those organizing exhibitions in conjunction with the biennale. “Aren’t there rather too many of them?” the paper asks. Mr. Baratta’s reply:

“No. And again this year I asked the curator of the international exhibition, Bice Curiger, to be extremely strict in assessing the projects submitted: just four out of ten were selected. Being able to say no is an important weapon in defending quality, intelligence and independence in a world where contemporary art has become fashionable.”

Changes that he and his colleagues have made to the art exhibition have increased its relevance, he argues, and made it a boon to the city. He shares:

“[A] few days ago, a -taxi owner said to me: ‘You know, the art biennale has become more important for us than the film festival. Because now we have work every day, and with the right sort of customers!’ I took that as a great compliment.”

But how do you attract the “right sort of customers,” we wondered? His answer, in part:

“We created a wooden deck for access, an attractive bar and a restaurant charging modest prices, quite unlike the outrageously expensive restaurants you find on the Grand Canal, more like something in New York or Paris.”

Truth be told, the idea Gallerist is most excited about comes in the section of the interview during which he discusses the innovative education programs he has brought to the exhibition, increasing the participation of teachers and students in the Veneto region. Mr. Baratta discusses a special transportation device the biennale recently adopted, to draw more children to the exhibition, which closes Nov. 27:

“A few weeks ago, we launched a shiny, bright red ‘Biennale Bus,’ which travels the roads of the Veneto four days a weeks, picking up children from schools and bringing them to the biennale.”