Oh, what a vicious circle this is: Occupy Wall Street comes to picket the banker fat cats in New York, the NYPD forces streets to close and erect metal barricades near the entrances of certain streets and subways to prevent random marches of the protesters, leading to even more unemployment in the area as the local Milk Street Cafe is forced to lay off a quarter of its workstaff because the police structures prevent people from entering the establishment. Consider this a case of a snake not eating its own tail, but firing it.

According to Milk Street Cafe’s owner Marc Epstein, he was forced to lay off 20 employees in his eatery because of the 30% decline in sales due to police barricades. Yet he does not blame the NYPD for the recent budget cuts, but the Occupy Wall Streeters themselves:

“What are [the protesters] trying to accomplish here?” Epstein asked Monday. “The end result is that I and all the wonderful people who work for me are collateral damage…

Mr. Epstein, Wall Street was never a “beautiful pedestrian mall” and the only people who ever walked around there were people who had to. Let’s not pretend that the area surrounding Zuccotti Park is like some beautiful wonderland: it’s full of narrow streets and constant construction at Ground Zero.

Luckily, his former employees won’t have that far to go before joining up the ranks of the disenfranchised and recently dicked over.

Howard Wolfson, the chief deputy mayor, dined at Milk Street today — perhaps to commiserate — though he said that the decision of where the barricades were placed were ultimately in the hands of Police Commissioner Ray Kelly.
Update: Chief Deputy Mayor Wolfson’s office called and clarified that the lunch their employer took today was with New York Assembly Speaker Shelly Silver, one of the lawmakers  who wrote in to Mayor Bloomberg asking for reduced noise from Zuccotti Park, as well as a removal of some of the barricades. Now that the Mayor seems to be doing his part in removing the barricades, Wolfson’s lunch at Milk Street and the removal of the barricades in the area can be seen as a symbolic gesture…though a much better statement might be the re-hiring of all the former Epstein employees. 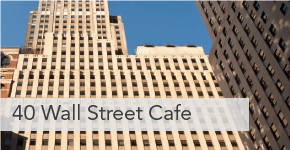