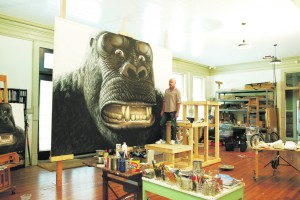 Bloomberg‘s write-up of the Walton Ford show at Paul Kasmin gallery reveals that the three massive, life-sized paintings of King Kong aren’t just the artist’s biggest: they are also among his most expensive.

Calvin Tomkins’ profile of Ford from 2009 mentioned that the artist’s work sells for “around four hundred thousand dollars,” meaning the King Kong portraits represent a jump, at $2 million.

As we wrote in the paper a few weeks ago, the paintings use a new technique of joining together large pieces of watercolor paper so that they appear to be a giant single sheet.