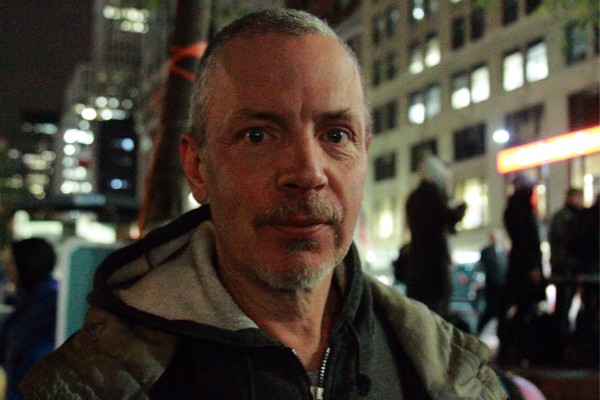 From Seattle
How long have you been occupying for? I came here about a week ago.
What would stop your occupation? Wow, sorry, too many things. There’s not just one issue with me; the way banks are dealt with, the way corporations are dealt with, some of the things the Government is involved in, like spending money on war instead of people. So there’s not one thing I can say, this is personally something that has been boiling for a long time with me. This is the rash the countries come out in. I think we need to discuss all the things that are wrong.
jhanasobserver 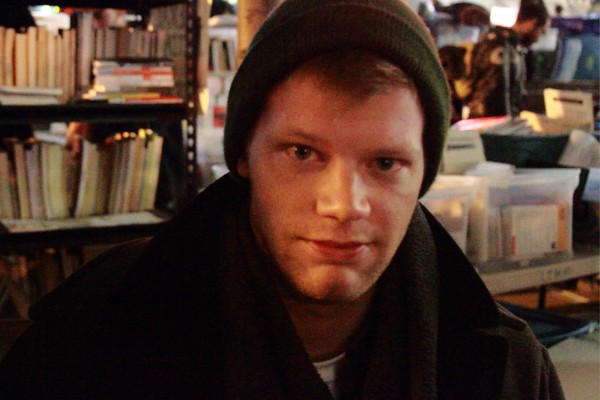 From Rhode Island
How long have you been occupying for? 17 days now.
What would stop your occupation? I think if there were criminal charges brought against the irresponsible people who ran us into this mess on Wall Street… corporate person-hood should also be removed, those would be huge incentives to stop occupying. But I think we’ve already accomplished a lot of what I was looking for, which is just visibility; opening up the dialogue in America that its okay to be angry with your Government without being a radical from either side.
jhanasobserver 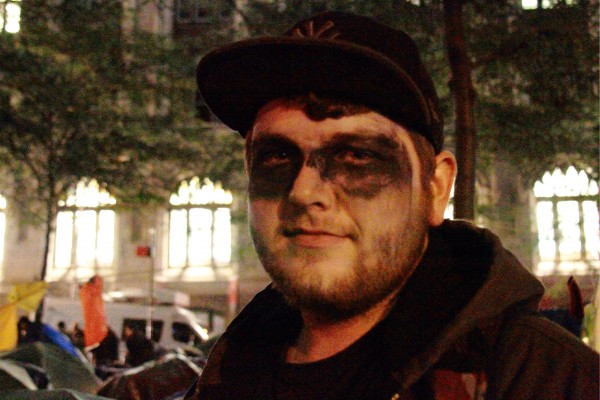 From Albany
How long have you been occupying for? I'm staying here but I'm making some visits. I've been at occupy Albany and wanting to come down here again and see how it's going.
What would stop your occupation? They need to bring back all the factories that we’ve shipped overseas. During the 60’s and 70’s, everything was American made and shit, now everything is overseas. Ever since then everything has gone downhill job-wise. People have lost jobs because factories have closed down. I also don’t understand why Obama bailed the banks out with 60 billion dollars. People should be furious. That could’ve been pumped into creating jobs, doing something productive with it. Don’t give it to the banks.
jhanasobserver 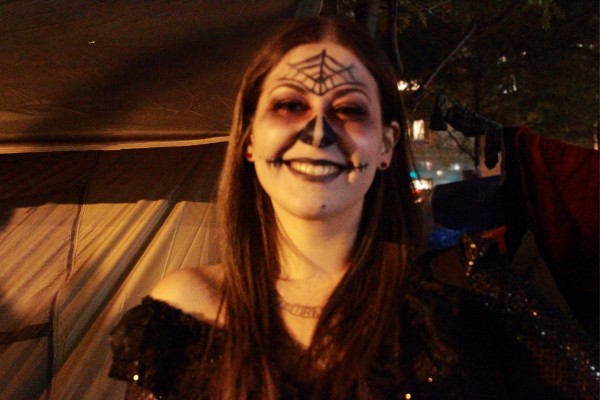 From? Jersey City
How long have you been occupying for? This is my fourth visit here, they do have smaller ones in Trenton and Jersey City but the energy here keeps me coming back.
What would stop your occupation? We have taxation but no representation, if they’re going to take my money, as a taxpayer, I want to know why. I come from New Jersey we have a really bad heroin problem. These are kids who I grew up with, kids who once had a future. Jersey’s really bad with drugs at the moment and I would rather see my tax money going towards more rehab centers than to the prison service or to aid Wall Street. Throwing them in prison is not going to stop them taking drugs.
jhanasobserver
Advertisement 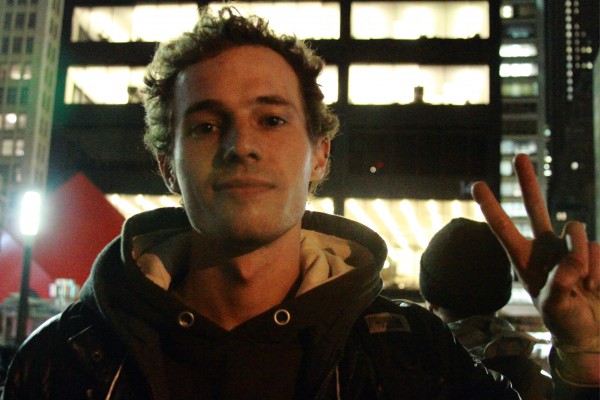 What would stop your occupation? Something that would allow me to be okay with the occupation ending would be to end all military occupations overseas, to end NAFTA, to see reparations for indigenous people and African former slaves, to see an abolishment of the corporate prison-industrial complex, to see all undocumented workers be given full citizenship, to see all corporate money taken out of the election cycle, to see universal healthcare and universal civil rights for homosexuals, transgender, felons and immigrants. I believe everyone knows that those are the right things to do.
jhanasobserver 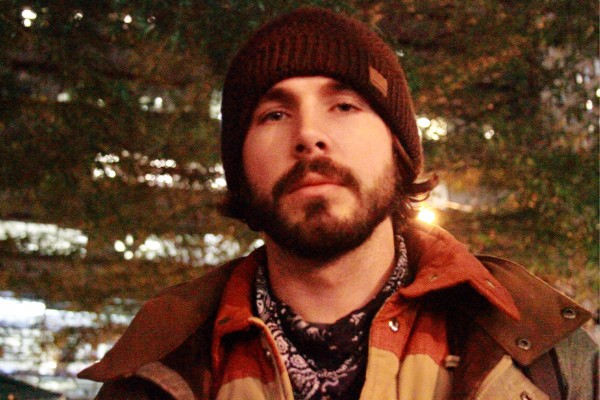 How long have you been occupying for? I came out on the 26th of September.
What would stop your occupation? Demands imply that we are in some way a criminal organization, we don’t have demands, we’re interested in constructing a viable solution to the system that already exists. I don’t think what we see as far as wealth is distributed is necessarily capitalism not function as much as it is capitalism succeeding. So I don’t know if there’s any sort of negotiation we can enter into with people who truly believe that capitalism is a viable economic system.
jhanasobserver 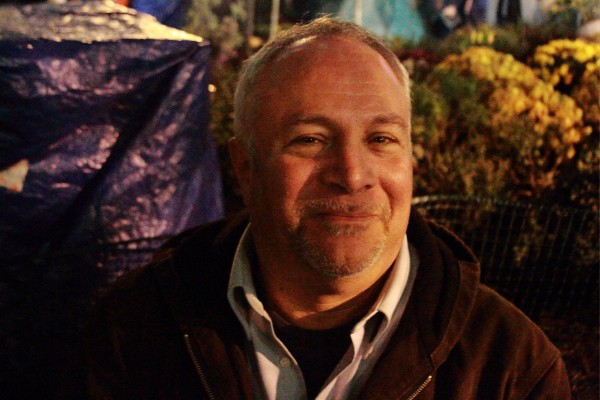 From New York City
How long have you been occupying for? I'm not particularly occupying, I just came down to talk to some of the guys that are here. I do support them.
What would stop your occupation? First of all reinstate Glass-Steagall and, on a broad scale, reverse the doctrine of corporate person-hood. The only way to achieve that is to nibble away at it.
jhanasobserver
Advertisement 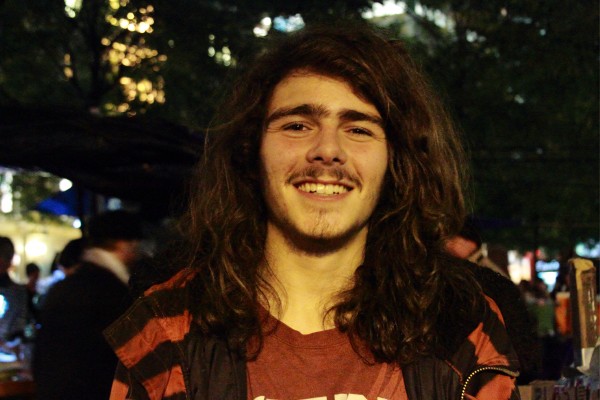 From Massachusetts
How long have you been occupying for? Today is our first day, we just got down and set up the tent.
What would stop your occupation? The thing that I like the most about this whole thing is this community being built here. I don’t think that anybody should stop, I think that we should just keep growing what is here right now, regardless of demands or trying to change the government, this is already working to some degree. I wouldn’t want to demand anything to stop this. I’m just happy to see being sharing more and smiling more.
jhanasobserver 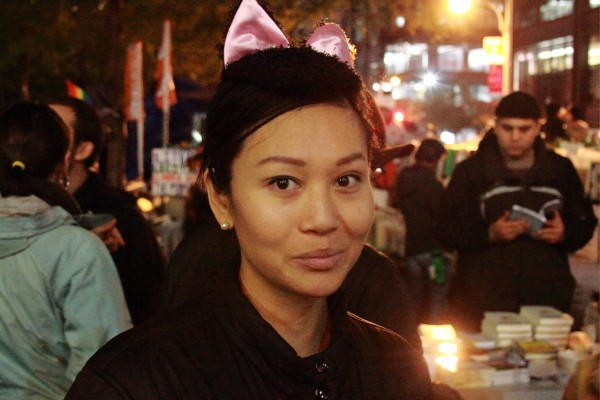 How long have you been occupying for? I came down last week but I go home in the evenings.
What would stop your occupation? Being arrested! Seriously though, we’re helping work the library so our position is more about getting people more educated, helping people have access to books and access to literacy. Our goals are more long term.
jhanasobserver 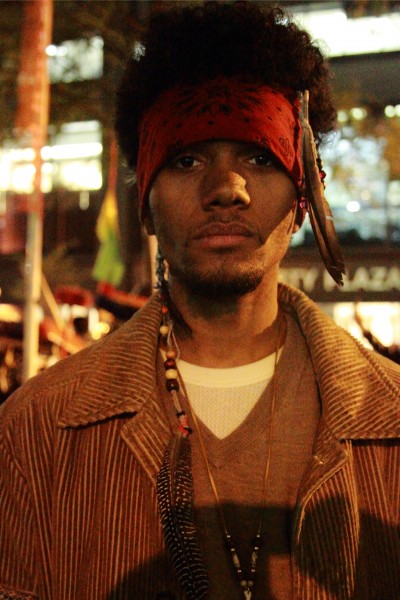 How long have you been occupying for? Since the start.
What would stop your occupation? The governments can surrender to our humanitarian will. The government is not humanitarian. They force you to pay to feed yourself. You hold onto money and Wall Street holds onto you.
jhanasobserver 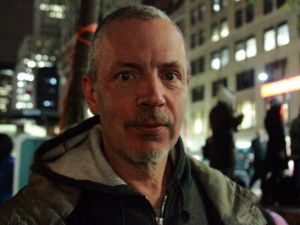 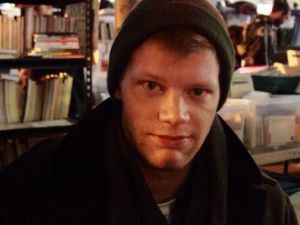 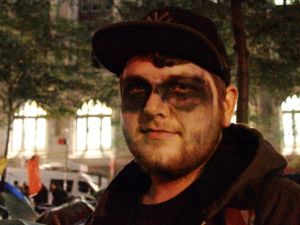 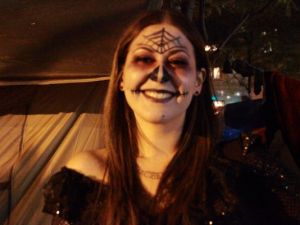 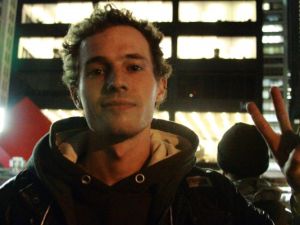 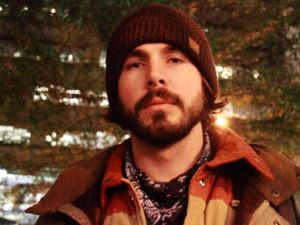 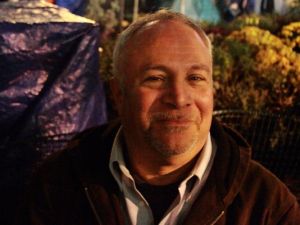 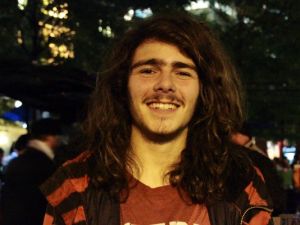 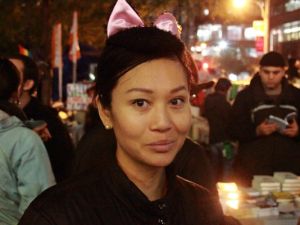 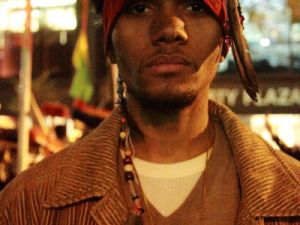 On Halloween evening The Observer made the trip down to Zuccotti Park. Away from the lights and glare of the official Village parade (where Occupy Wall Street had a space), we thought we’d find the truly hardy souls, who care not for the frivolity that such events entail. It was a perfectly mild Fall evening and with so many absent, an air of calm prevailed over the park, people were peaceful and in much more philosophical moods.

Much has been made about the lack of demands, and the incoming cold weather, putting an ending to the occupation, but what of the people actually occupying? What would make them dismantle the tents, organize their few things and go back home? Wherever home may now be? That’s what The Observer went to find out.

All photos credited to: Lexi Henigman