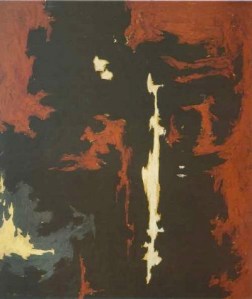 Ever since a 1949 Clyfford Still painting, 1949-A-No.1, was hammered down last Wednesday evening for the record-breaking price of $61 million at Sotheby’s, the art world has been alive with speculation as to who bought the painting. This much is known for certain: whoever bought that painting by Still also bought a second Still painting two lots later, for $19.7 million, as well as a Joan Mitchell painting, for a world auction record price for Mitchell of $9.3 million. (A group of four Still paintings that totaled $114 million at Sotheby’s was being offered by his family, to benefit the Clyfford Still Museum in Denver, Colorado) The bidder on all three paintings was bidding anonymously, on the telephone through Sotheby’s.

Another thing is now also known for certain. Over the weekend, the Financial Times floated the theory, which had been floated by a number of dealers, that New York financier Israel Englander was the buyer. “Dealer sources in the room tentatively named the anonymous bidder as hedge fund boss Israel Englander,” the FT reported. The Observer understands from a reliable source that this is definitively not the case.

If Mr. Englander didn’t buy the pictures, who did?

As to who bought these works, spending a total of $90 million that night, other guesses are in play among dealers, among them that the buyer is the Qatar Museums Authority. In July, The Art Newspaper revealed that the Arab Emirate of Qatar is now the world’s largest contemporary art buyer, with many of the purchases—which include Damien Hirst’s Lullaby Spring, for $19.3 million—at the behest of 27-year-old Sheikha Al Mayassa Bint Hamad Bin Khalifa Al-Thani, daughter of the Emir of Qatar. Should it have been the Qataris who bought the Stills and the Mitchell, presumably the bidder might have been Ed Dolman, the former Christie’s chairman who in June was appointed executive director of the Qatar Museums Authority. Another theory that is making the rounds is that the buyer is Alice Walton, for her Crystal Bridges Museum of American Art, which has just opened in Bentonville, Arkansas. A recent article on the museum in the Huffington Post begins, “As an heir to the Wal-Mart fortune, Alice Walton had the means to buy almost any piece of art on the market.” The Clyfford Still at Sotheby’s would be a worthy addition to a museum of American art.

Neither the Qatar Museums Authority nor Crystal Bridges were reachable for comment, so in the meantime all of this remains on the level of speculation.