While it’s been pretty big news today that Ashton Kutcher tweeted #noclass to  Penn State’s firing of football coach Joe Paterno (for his part in the scandal involving assistant coach Jerry Sandusky molesting young boys), what’s less known is that Nick Cannon somehow managed to top that in levels of grossness this week.

Mr. Cannon, who runs part of Nickelodeon because he’s married to Mariah Carey, played a hilarious prank on America when he pretended that he had tied his 92.3 radio co-host’s dog to a bunch of balloons and set the little guy floating above the Hudson River.
From the 92.3 website:

How Many Balloons Could Lift Sarah Lee’s Dog? About 50. Now Can You Help Us Find Her?

During the Halloween festivities, Nick and Sarah Lee had a bet. The bet was over who could carve the best pumpkin. The wager was if Nick won, he got Sarah’s little yippy dog, Charlie Roo. If Sarah won she would get to watch Dem Babies.
charlieroo How Many Balloons Could Lift Sarah Lees Dog? About 50. Now Can You Help Us Find Her?

Well Nick won control of Sarah’s pup. So what’s he supposed to do now?

Nick has always wanted to know how many balloons it would take to lift lil Charlie off the ground, so he decided to get it done on the show today.

This was accompanied by a video of some citizen journalist who just happened to catch a video of the dog floating away:


Of course it’s a joke and never happened, but it’s a stupid, mean joke. It’s akin to pretending you kicked a dog. “Haha! Fooled you! I only pretended to kick a dog!”

We hardly ever say this, but can someone call PETA and have them yell about this for awhile? And then can the Internet ban Ashton Kutcher for not understanding how the Internet works (again)? 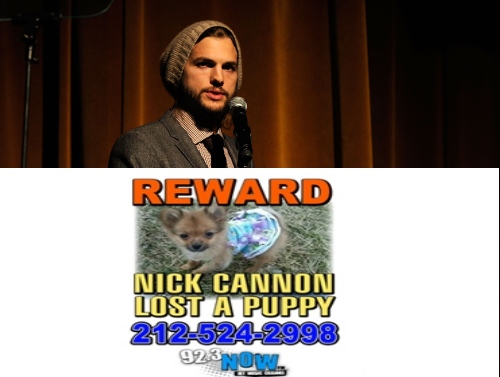