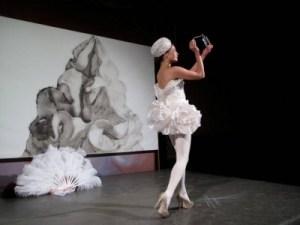 The "Whipped Cream Dance" from "Cockaigne." Photo by Will Cotton.

Appropriately, the room smelled like cotton candy during Will Cotton’s Cockaigne, a performance at Prince George Ballroom on Friday night. The audience arrived early to eat pink cotton candy made by about a dozen young women dressed as ballerinas. They washed it down with champagne. This is the kind of celebratory hedonism we have come to expect and appreciate from Mr. Cotton. It was the artist’s first live stage performance, and he had asked John Zorn to compose music and Charles Askegard to choreograph a dance, all inspired by the fluffy candy the audience was munching on. It was billed as a “short ballet.”

We did not know how short.

Two violinists played a quick minor key scale (it sounded like some combination of Mr. Zorn and Tchaikovsky), while a woman in a poofy white dress sprayed perfume around the stage. A second song, faster and upbeat—it sounded more like Steve Reich than Mr. Zorn—began playing while three ballerinas danced serenely. Then it stopped.

Mr. Cotton came out and the audience clapped. It was over in a couple of minutes, just as the audience was growing comfortable with watching. It was a strange kind of subversion, one that was antithetical to a lot of performance: instead of an over-abundance, Cockaigne was starvation. Mr. Cotton gave us a glimpse at incredible pleasure, and then he took it away. The only note in our notebook was: “An hour of drinking.”

“It just felt right to me,” Mr. Cotton said to us after it was over. “It’s my first step into anything that has a time signature at all. And that’s what I had to say. Because it’s performance art, and not theater, we don’t have to have the expectation of an hour and a half show. It’s whatever we want it to be.”

Marilyn Minter walked up and gave him a big hug. “Thank you for coming!” he said. Someone else came up and snapped his picture.

“The way I look at this,” we told him, “is it was more like pop music than performance art.”

“That’s where this is coming from for me,” he said. “I mean, I worked on a video for Katy Perry. It’s the three-and-a-half minute format, and that’s what I based these two pieces on. I’ve seen a lot of performance art that’s excruciatingly long. I thought, if I’m gonna do what I want to do with this medium, I’m gonna make it fun.”

A little later, a scantily clad ballerina told us they were out of champagne.

“Do you want a cupcake, though?” she asked.

She produced the treat out of nowhere. It was delicious.