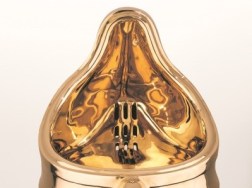 In the spring of 1981, the artist Sherrie Levine, then 34 years old, exhibited a series of photographs at Metro Pictures gallery. These were rephotographs—exact reproductions—of Walker Evans’s famous documentary series Let Us Now Praise Famous Men, and Ms. Levine showed them as her own artworks. The work raised good questions: is to copy and recontextualize the same as to steal? What is our agency in relation to the media around us? And what is a female artist’s role in a field that has always praised Famous Men?

Critics were quick to peg such scrappy “appropriated” work by Ms. Levine and her artistic peers—Louise Lawler, Richard Prince, Cindy Sherman, Haim Steinbach and Barbara Kruger among them—as challenging to ideas of authorship and resistant to codes of representation.

Thirty years later, in “Mayhem,” Ms. Levine’s first major museum survey, that polemical work, After Walker Evans 1-22 (1981), is on prominent display, but Ms. Levine’s ironic attitude toward art, museums and authorship is not. “Mayhem” is a clean, quiet and handsome retrospective. Contrary to its title, and as you suspect Ms. Levine well knows, there is no mayhem in sight—or is there?

Curated by Johanna Burton and Elisabeth Sussman in collaboration with the artist, the show consists of five rooms of meticulously gridded, tastefully lit art. There are two grand pianos with sculptures on top, moodily lit vitrines picked out in puddles of light, gleaming bronze sculptures, rows of skulls on velvet and beige-painted walls. The installation is so lugubrious, it lacks only a vase of freshly cut Calla lilies; Orchids 1-10 (1964-97), rephotographed flower photos, plays that decorative role.

Ms. Levine’s iconic photographs are the best part of the show. These include not just After Walker Evans and Orchids but After Karl Blossfeldt 1-20 (1990). Upon close inspection, each image seems photographed from a catalogue or print: some blur, some breath of material interference exists between original object and viewer, and this testifies to a time before digital images or scanning, when to reproduce meant to rephotograph, with the chemical, lens glass and analog interference that entailed.

If you know of Ms. Levine as an appropriation artist, the 23 abstract paintings here may come as a surprise. The Melt Down paintings, from 1990, aim for the all-over computerized average color of a Monet, Mondrian or Kirchner. These are saturated gray, dark gray and milky oil-paint stains in which the wood grain soaks through. Six oil-on-aluminum chessboard grids (Red and Grey Check: 7-12, 2000) reference both Carl André and Duchamp. Finally, there are framed plywood boards in which lemon-shape wood knots have been picked out in gold or silver paint. The works slyly but unpersuasively critique abstract painting: are the knot paintings “not” paintings? Or are they just paintings?

Ms. Levine has a taste for creating sculpture based on Surrealist art. In La Fortune (After Man Ray) (1990), four full-size mahogany and green felt billiards tables, each holding two white billiard balls and one red one, cast stark shadows. These rectangular forms echo the trapezoidal shape of one of the windows in the Whitney Museum’s Marcel Breuer building. If the legs of the tables seem unwieldy, it is because the forms have been copied from Man Ray’s painting La Fortune (1938), a work on display on the Whitney’s second floor. Fountain (Buddha) (1996) cites in bronze the Duchamp urinal from which its shape derives: the readymade—and the pissoir—as golden calf. (To drive this point home there is a literal golden calf—False God (2008), a fetishitic sculpture of a baby cow skeleton—in another room.) Ms. Levine’s cast bronze realizations of Duchamp’s Malic Molds (Bachelors; 1-6, 1991) from his Large Glass look like sex toys or gleaming cocktail shakers. Two grand pianos are topped by Brancusi heads recast in glass, Crystal Newborn (1993) and Black Newborn (1994).

A lurking subtext connects famous men and bachelors, urinals and abstract painting: luck as a lady but the playing field as consisting entirely of balls. A suspicion emerges: “Mayhem” is a new Sherrie Levine installation made of Sherrie Levine works to push back against the form of the museum survey, and her copies of overdetermined art about and by famous men help her make this point.

Although the pieces in the show range from 1964 (an early orchid photograph) to 2010, the work is not arranged chronologically, or by material or theme. Yet the hanging was meticulously executed to rhyme or echo with the Breuer building—the photographs and sculptures arranged in neat grids to match the tiles on the floor and panels on the ceiling—and this, along with some dim track lighting, gives the show a creepy, morguelike feeling. You hear the echo of F.T. Marinetti declaring, “Museums, cemeteries!” “Mayhem” looks mortuary, yet while the exhibition is clearly playing on the status of museums as spaces that deaden artwork, most of the work gives the impression that it was dead on arrival.