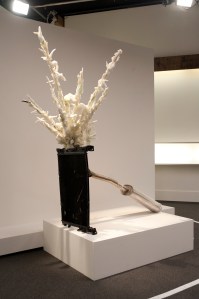 Black Friday has come and gone, and The Observer made it through mostly unbruised, even though we live near a Macy’s. We were neither pepper-sprayed nor shot. And what did we earn for our perseverance, other than electronics we don’t fully understand (it’s definitely either a musical tie rack or a radio-toaster)? Why, a thirst for the unabashedly commercial, a desire for further outlets for our gluttonous lust for all things branded and shiny, and payable-off in installments.

It was, therefore, with some relief that we watched last week’s episode of Work of Art: The Next Great Artist, which revealed that the art world is a macrocosm of Macy’s on Black Friday—it’s filled with spiteful, backstabbing people who are driven to unspeakable acts in the name of money and brand loyalty. Bravo reminded us that, as it has been since the days of the Medicis™, great art is sponsored by patrons looking to hang their logos alongside anything avant-garde.

WEEK SIX: In which we learned that during the process of ascending to that higher plane on which great artists dwell, fledgling creatives must please not only ornery critics, tall-haired gallerists, couture-clad socialites, and lispingly patrician auctioneers—but also car manufacturers.

SUMMARY: On the seventh episode of our reality-TV romp through the genesis of great art, the contestants were challenged with making works that incorporated Fiat car parts. They were told that by making art about automobiles—in particular, the automobiles manufactured by the sponsors of the show they were on—they followed in the footsteps of past great artists Richard Prince and John Chamberlain. (This is like saying that by writing words I am following in the footsteps of Martin Heidegger and Chelsea Handler.)

Having discarded the silly notion that artists will create work without a large cash prize, the show hosts assured their charges that the winner would receive $25,000, furnished by the Italian carmaker. The harried contestants then crafted droopy robots, nonfunctioning kaleidoscopes, exploding mufflers, and leather Rorschach blots. It was the exploding muffler that drove it home for the judges, earning Sara Jimenez a win; Michelle Matson, meanwhile, was given the boot, for what appeared to be a goofy homage to Disney/Pixar’s Cars franchise.

LESSON: Bravo’s scholars of reality have once again brought to light an important fact: often the art world hides its corporate ties, keeps its billionaire oligarchs behind a curtain that is swept aside only when it comes to pick up the fat checks (and whatever advice, solicited or not, that might accompany them).

Consider David H. Koch, one of the shady brothers who subsidized the fledgling Tea Party: he’s a Metropolitan Museum trustee, and just last year made a $10 million pledge to that institution. Or recall the “Skin Fruit” exhibition of Dakis Joannou’s art at the New Museum, or the Guggenheim Bilbao show of Dimitris Daskalopoulos’s collection, in both of which cases a major benefactor’s personal taste determined the art on view in a museum he partly bankrolls.

So the professorial types at Work of Art took it upon themselves to serve up a Hans Haacke-style systems lesson: when it comes to mega-donor or corporate sponsorship of the arts, the Man generally expects to get something in return for his creative patronage. In the case of our little show, this was a gaggle of artists employing their talents to transform car parts into rarefied pieces of art, with tastemakers of the art world then rating the works based on how well the car parts were incorporated—as if this had always been a prerequisite of good art.