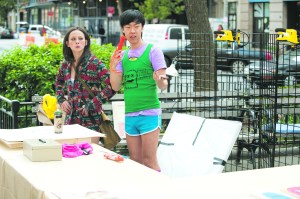 “Throughout history, artists have always faced a struggle with art versus commerce,” Work of Art: The Next Great Artist contestant mentor and real-world auctioneer extraordinaire Simon de Pury professed, with the sweeping arm gesture of a true scholar, in the latest episode of our favorite reality-TV survey on the Art World at Large. We eagerly nodded as we scribbled “history = art v. commerce” in our Trapper Keeper. If it’s on Bravo, it’s probably true.

What we had yet to glean from episode eight, however, was that “commerce” actually means pseudo-artistic kitsch (usually spray-painted T-shirts, sometimes underwear, always from American Apparel) peddled by devious artist-mendicants on the mean streets of Tribeca. True “art,” on the other hand, is barely tainted by such lowly forms of pecuniary exchange, and is rather more fully at home in the rarefied, white-walled shrines to creativity known as blue-chip galleries, where ne’er a word of commerce shall e’er be spoken.

“For your challenge, it’s time to sell out,” that teetering billboard for couture/show-host China Chow told her snooty charges, who looked appropriately aghast. And to “sell out,” we gathered, meant to sell artworks outside of the gallery system. To successfully peddle your pieces outside the art-dealing complex might mean a short-term success, Bravo’s intellectual top dogs (a judging panel including two New York gallerists, for what it’s worth) informed us, but it’s back in the gallery where an artwork’s true, auratic value shines through.

EPISODE 8: In which we learned that to make work enjoyed by the hoi polloi is fine, so long as you view the whole experience as a brief out-of-gallery experiment in relational aesthetics from which you can earn a little cash before sprinting back to your gallery’s white-walled panic room.

SUMMARY: In the latest episode of Work of Art, the remaining contestants were presented with the “sell out” challenge, for which they would have to craft at least one artwork to vend to the public, from tables set up in Tribeca Park. The hitch was that this work must also be “worthy of presenting in a gallery show” [emphasis ours]. The artists were nominally paired off, but basically worked independently. The duo that sold the most was promised immunity in the next challenge and $30,000 plucked from the padded coffers of the mystifying Blue Canvas magazine, which this week we will libelously posit is funded by the illicit sale of tiger pelts.

Relational artworks fared well, with extra points for confronting the non-art world with artistic nudity—contestant Lola Thompson got naked for a self-portrait—though there was sadly not a sensory deprivation pool in sight. It turned out that while shoppers liked T-shirts—bearing images of everything from Fruit Roll-Ups to boobs—the plebeians preferred “artistic practices which take as their theoretical and practical point of departure the whole of human relations and their social context, rather than an independent and private space,” as Bourriaud would put it. Basically, they liked getting their portraits drawn (courtesy of contestant Sara Jimenez), trading their autographs for that of an artist (Kymia Nawabi), and having secrets whispered in their ears by sultry nymphets (Ms. Thompson).

Ms. Jimenez’s team, which also included the booty-bearing, short-shorts-wearing contestant Young Sun Han, earned the most money at their booth and therefore received Blue Canvas’s blood money. Sarah Kabot, meanwhile, was chucked out for her “hipster, cool, Native American paper headdresses” and mammary-emblazoned T’s, which in the gallery came off as a “Halloween costume,” according to Half Gallery owner/judge Bill Powers.

LESSON: “I don’t think that most contemporary artists actually think that there is some kind of struggle between art and commerce, that is kind of this odd, Marxist critique,” Ms. Kabot told The Observer after her brutal elimination was aired, proving that she had indeed succumbed to that fatal temptation to distrust something Mr. de Pury aphoristically stated as fact. She did, however, seem to understand that she was given the boot because her artwork “failed as a work of art,” and because, in her words, “it wasn’t extraordinary, exciting or thought provoking.”

That was certainly one reason she had to go, the other being that she failed to acknowledge how insurmountably deep the divide Bravo was digging between highbrow art sold in tony galleries and lowbrow art sold on the street truly was. “The idea that you would actually sell your artwork and that would support you, that that would be your livelihood is, I think, most artists’ dream,” Ms. Kabot intoned dreamily, without offering a list of the acceptable places in which one can sell their artwork and still not be a sell-out (alphabetically it goes something like Andrew Kreps to ZieherSmith).