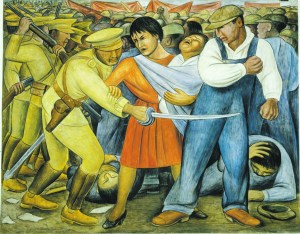 In 1927, Diego Rivera was sent to Moscow by the Mexican Communist Party to sit on a platform a few seats down from Stalin and view celebrations of the 10th anniversary of the October Revolution. While there, he produced a small watercolor sketchbook that followed an ordinary family joining the parades, beginning with simple, bland figures in washed-out beiges, but introducing symphonic compositions of navy blues and martial blacks and dynamic ovals in concert with the waving red banners and the glory of the crowds. He was also introduced to two American men who were touring Europe to learn about currents in contemporary art, and in 1929, one of those Americans, Alfred H. Barr Jr., was appointed the Museum of Modern Art’s first director and invited Rivera to stage a one-man show. In 1931, Abby Aldrich Rockefeller, oil money matriarch and patron of the museum, bought Rivera’s Moscow sketchbook for $2,500 to help finance the artist’s trip to New York, where he constructed eight “portable murals,” including one of the Mexican revolutionary leader Emiliano Zapata, and another of an Aztec jaguar knight stabbing a conquistador in the throat with a stone knife. The jaguar knight mural ended up in Northampton, Mass., at the Smith College Museum of Art, while Zapata stayed at MoMA but was stored away out of sight. Eighty years later, five of the eight murals have been reunited on MoMA’s second floor, and you can see them for only 25 bucks, and maybe another two bucks for a postcard of Zapata.

Rivera invented his portable mural—a small, freestanding concrete wall—for the 1931 show, but he made his first experiment with the form, a 3’x4′ detail copied from another mural in Cuernavaca, the year before, as a commission from the wife of the American ambassador to Mexico. Market Scene shows a Mexican Indian woman and her daughter, in white dresses, with braided hair, kneeling on the ground. The subject natives are pictured from behind, so the only visible facial expression is the conquistador’s, as he leans over to receive the baskets of fruit and fish being offered in tribute. His expression is hard-edged and concentrated, but not garishly cruel. He looks quizzical, as if he can’t make out what the woman might be thinking.

Rivera was more interested in crowds than in individuals, more intrigued by movements than the body at rest. The severe foreshortening of his murals presses their extraordinary drama down into ordinary life; their flatness pins dynamic archetypes in place like a butterfly. Zapata, dressed in white, with a brown leather shoulder bag and a blood-stained sickle, stands at the head of a crowd of peasants armed with farm tools. A dead hacienda owner is under Zapata’s feet and the dead man’s horse is beside him. Marble dust mixed into the cement makes the leader’s face glitter like a New York sidewalk. With a uniquely distinct and characterized face—sharp cheekbones, long mustache, bloodshot eyes—he looks like a man alone, despite the crowd; as he pulls the horse’s bridle with his left hand, he is leaning back into the current of history. But the horse, with a mane like a caryatid’s hair and delicate, pigeon-toed forelegs, is fixed in place. They’re either beauty and propaganda, or capital and art. (Of course they were simply the people repossessing beauty from the ruling class, but who’s winning now?) The horse’s head and the great sweeping curve of its neck make a single, voluptuous shape; its vertical, almond-shape eye looks like something else again.

One of the murals Rivera made for the original show, Pneumatic Drilling, was lost, but the museum has a full-size cartoon, and in the absence of color it’s easier to see Rivera’s interest in outline. The bodies begin as rectangles, simply marked-off space, meaning nothing without action, but their arms and legs, once engaged, become dramatically exaggerated swooshes. He’s even better at relationships among separate moving parts: murals of the New York skyline are dull, because the buildings are blue and don’t move; but a watercolor sketchbook of New York under construction, with red steel beams and workers that Rivera can move and place, still looks fresh. The crowd scenes in Moscow use nothing but ovals and daubs to represent hundreds of people, and you can hear them shouting; overlapping ovals are soldiers crossed by long rifles, and you can hear their marching feet.

The Aztecs had an elite fighting force called the jaguar knights, who wore the cat’s skin and summoned its courage in battle; in Indian Warrior, a jaguar with glowing almond eyes, black lips and huge white fangs crouches over a fully armored, supine conquistador. Behind them, brown legs—two naked, two in soot-marked, yellowish jaguar skin—walk past a stone wall. The only white skin visible is that of the conquistador’s left hand, uselessly gripping the Aztec’s right wrist; the rest is hidden behind steel. But the jaguar’s stone knife still finds its opening.

As the scorpion in the ancient fable says to the frog, “It is my nature.” In addition to five of eight murals, the two separate sketchbooks, several full-size cartoons and historical ephemera, the exhibition includes Rivera’s design for a mural in Rockefeller Center; Nelson Rockefeller’s polite, befuddled letter asking Rivera to remove the face of Lenin from the mural in progress; Lucienne Bloch’s photograph of the Lenin detail before Rivera refused and the Rockefellers destroyed the mural. As fatally and intimately as the Spanish and Aztec cultures affect each other, one doubts whether they ever really communicate.