After a few glasses of midday white wine in the lounge of the Brook Club, The Observer walked into the third floor dining room and found ourselves seated next to Gay Talese. We had seen him on a few lucky occasions over the past 12 months—the last night of Elaine’s, the Norman Mailer gala, etc.—and this most recent instance, Chuck Pfeifer’s annual Christmas luncheon, was hardly a surprise.

(Mr. Talese, of course, was clad in not only a tie, but a great one, and a waistcoat.)

Crab cakes (as ever) arrived and we dispatched with them as James Woods and Jay McInerney gave saucy toasts to Mr. Pfeifer, a New York survivor. Then, at a break, Gay Talese turned to us and asked the thing you ask around this time of year.

We took our glass, now tinted red, downed it, caught the eye of a server and flitted a hand.

“It turned out pretty well.”

Did it? we immediately wondered. The memories, or at least the best of them, were barely memories at all—dimmed by drink and swathed in postmidnight darkness, the past year hardly even happened. And all the people, the parties, the pomposity, the pleasure: it was a year our friends say they taste only in reverie, dreamt up during the hours when most of town, even this town, has chosen the bed over the bar. But we clock in late and turn in even later. It was a year of living nocturnally.

Mr. Talese turned toward us.

The next glass of wine arrived, and we guided it toward our lips.

Quite the interviewer, this guy. But would Mr. Talese care about, say, Kanye West? We thought about back in February (lo, those many months ago …), when we met him at the George Condo opening. “I don’t talk to the fucking press!” Mr. West insisted, loudly, before apologizing and regaling us with stories from recording Watch the Throne with Jay-Z in the depths of the Mercer Hotel. Would Mr. Talese care? Perhaps not. Running around with Mila Kunis and Scarlett Johansson at the White House Correspondents Dinner, that’s a good story, right? Or maybe …

“I did meet Mick Jagger,” we blurted out.

He turned to us, intrigued anew.

“Mick Jagger! How did you manage that?” 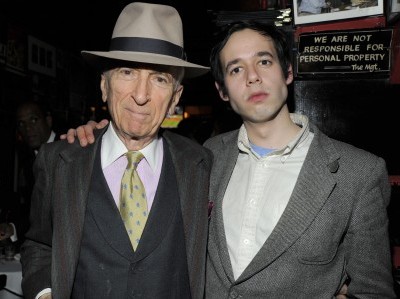