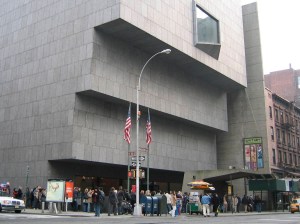 Artforum’s January issue just landed on our desks, and we are happy to report that it features the magazine’s annual preview of shows coming up this winter, and includes Douglas Crimp on Cindy Sherman’s upcoming Museum of Modern Art retrospective and Branden W. Joseph on what sounds like an insanely great show about the 1970s avant-garde in Buffalo, N.Y., scheduled for that city’s Albright-Knox Gallery.

Gallerist was also thrilled to see a preview of the 2012 Whitney Biennial, courtesy of Artforum associate editor Caroline Busta, who shares some new details about the space in which the work by its 51 artists will be shown. Here is Ms. Busta:

“This living, evolving iteration of the Whitney Biennial… will give us the American classic in a versatile and fluctuating format: Painting and sculpture installed in an open-plan design such that the idiosyncrasies of the museum’s near-windowless brutalist shell will dictate spatial relations…”

Which sounds intriguing. Will the work on view literally “fluctuate,” with work being traded in and out as the exhibition progresses? (Robert Morris and Joe Scanlan rotated the work on view in their exhibitions at, respectively, Castelli and Wallspace this year.)

What will certainly fluctuate are the offerings in the exhibition’s fourth-floor film galleries, which are being overseen by Light Industry’s Thomas Beard and Ed Halter. According to Ms. Busta, invited filmmakers will host screenings “of their own work along with their influences” during the biennial. Plus, curators Elisabeth Sussman and Jay Sanders also plan to have “a throng of music, theater, and dance projects.”

We’re going to go line up outside the Whitney right now, just in case Werner Herzog ends up hosting one of those film events.