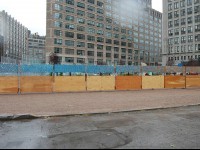 A group calling itself Occupy Art NYC has issued a letter to the Lower Manhattan Cultural Council asking that Duarte Square–open space near Canal and 6th Avenue that the LMCC has used as an exhibition site called LentSpace–be given to the Occupy Wall Street movement for its use.

The letter reads in part: “The historical tidal wave and momentum toward social justice and equality has perhaps never been more pronounced or necessary in our lives, and we invite your solidarity.”

The space is owned by Trinity Real Estate, the real estate group of Trinity Church, which has leased it to the LMCC. As The Nation noted yesterday, Trinity has come out in favor of the Occupy movement while at the same time refusing to allow protestors to use Duarte Square. When protestors recently cut a fence surrounding the square, Trinity called the police.

Among the hundreds who have signed the letter–which is online here–are artist Laurie Anderson (who advises the LMCC), musician Lou Reed, author Salman Rushie, Creative Time director Anne Pasternak and Adam Kleinman, who was the founding curator of LentSpace.