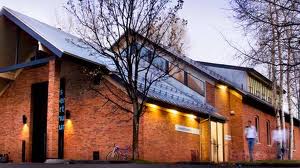 Lee Mulcahy, an artist and the leader behind the Occupy Aspen movement, has been told by police that he can no longer set foot on the site of the future home of the redesigned Aspen Art Museum. Museum officials told the Aspen Times that Mr. Mulcahy had “replaced museum signs with his own signs,” posting “for sale” signs on trailers on the property.

Mr. Mulcahy denies this, though he admitted to posting different signs at an earlier time. Police have not charged him with anything, but an Aspen police officer did have this to say: “I made it very clear to Mulcahy that he was not allowed to return to the Art Museum property or else he would be arrested for trespassing, and Mulcahy told me that he understood and would not go onto the property again.”

Aspen, a wealthy town popular with celebrities as a vacationing destination, is not really the place where one would expect people to be big fans of the shenanigans of the 99 percent.  Occupy Aspen, by the way, sounds like a pretty humble affair. Mr Mulcahy refers to the movement in the Aspen Times as “all 8 of us.”