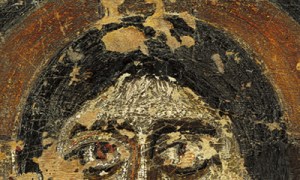 Part of an encaustic icon of Christ, 6th-7th century. (Photo courtesy of the Onassis Foundation)

Among the 170 works from Greece now on view at the Onassis Cultural Center in Midtown are examples of cultural appropriation and kitsch, abstraction and remarkable stylistic diversity. They are products of a time marked by a massive worldwide economic depression–more than 1,300 years ago.

The exhibition that houses those items, “Transition to Christianity,” spans the third through seventh centuries (the Dark Ages, in some historians’ nomenclature), when highly figurative, Greco-Roman imagery was giving way to flatter, wide-eyed depictions of Christ and other icons. Most of the artifacts, which fill five modestly sized galleries, come from Greek museums, and some have never been previously displayed in public.

After a brief greeting–first in Greek, then in English–from Onassis Center president Anthony S. Papadimitriou, we were shepherded through the dimly lit exhibition space by curator Slobodan Ćurčić, who explained how seemingly common household items–oil lamps, jewelry, table legs–revealed a steady shift from sculpture to wall relief, Latin to Christian symbols, pagan figures to sheep.

Mr. Ćurčić also noted that the period bounded by the exhibition marked the birth of art collecting. Though pagan works were often destroyed, many others were collected by the Christian social elite purely as art objects.

According to Peter Brown, a Princeton history professor who advised on the exhibition, “Transition” signals that the Dark Ages–an area long neglected by researchers–are once again a popular academic topic. (Is it a coincidence that we have multiple museum shows on art of transition, protest and economic instability at a time of our own economic decline?)

“This exhibition is devoted to showing the strange and colorful life of an age which has once been consigned to the shadows, as an age of death and gloom,” Mr. Brown quipped. “Colorful,” to be clear, is not a word that could not be used to describe the ceramic fragments and altarpieces that fill most of the exhibition, but no matter: it is thoroughly illuminating on a topic the museum world rarely devotes much time or space to.

There was even a prominent Greek politico on hand, cementing the significance of what would otherwise have been a routine press preview. Greek chatter subsided immediately as the robust, silver-haired Greek minister of defense and vice president of the New Democracy Party Dimitris Avramopoulos took the podium, remarking–rather gingerly–that Greece is also now in a moment of “transition.”

What we all knew to be a glaring understatement was underscored by news that EU leaders were at work on a bailout of the continent’s weakest, most beleaguered national budgets (Greece’s among them), with the future of the euro hanging in the balance.

Now more than ever, Mr. Avramopoulos said, “Culture is our best weapon.”