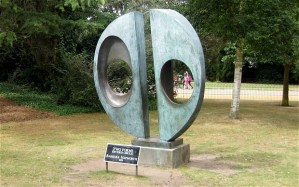 A $1 million sculpture by Barbara Hepworth was stolen from Dulwich Park in South London this week. Scrap metal thieves–something of an epidemic in the UK right now–are suspected of committing the crime.

The piece, Two Forms (Divided Circle), was sawed off at its base and towed away. It had been on display in the park for more than 40 years. The theft of metal has become so rampant that Scotland Yard has formed its own task force to combat it. According to the BBC, metal theft costs the British economy more than $1 billion each year.

As scrap metal, the piece is worth “only a fraction of its value as a complete work,” the BBC said.