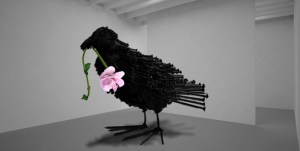 For his first show for the Paul Kasmin gallery, the artist Will Ryman will take over both of its locations with two massive installations, one in the gallery on 10th Avenue and the second in the newly opened space on West 27th Street, the former home of Bungalow 8, just around the corner. The show will run from February 16  to March 24.

The two projects both feature an obsession with trash and items found at hardware stores. The first, called Everyman, will turn the original gallery into a gigantic human form in repose, some 50 feet long and curved around the walls of the gallery. Mr. Ryman’s shirt will be composed of work boots, flattened and painted, and his extended fingers will be bottlecaps.

“There’s a directness to these materials that I really like,” said Mr. Ryman, son of Minimalist painter Robert Ryman.

The second project, Bird, features a giant raven made of nails that range in size, from one inch to three feet. The bird holds a rose in its mouth, perhaps a reference to Mr. Ryman’s installation The Roses, which appeared on Park Avenue earlier this year. His roses could also be spotted at a new installation, Desublimation of the Rose, at the Fairchild Tropical Botanic Garden during Art Basel Miami Beach.

“There’s a lot of myth surrounding this show,” Mr. Ryman said, referencing both of his new pieces. “The beginning of life, the end of life—is he sleeping, is he dying? The bird references the soul leaving the body, the shoes reference the everyman.”

Gallerist nodded to a woman dutifully tearing open work boots as we walked through Mr. Ryman’s workspace on the Bowery. The second part of the 10th Avenue space will allow visitors to walk inside Everyman’s head, which will be filled with spirals of rough, house-painting brushes, and Mr. Ryman showed us a few prototypes. We thought they looked remarkably like double helixes. Mr. Ryman chuckled. “Well, yeah,” he said.

Filed Under: Arts, Will Ryman