TRENTON – With an objection lodged over the dissolution of annual school budget votes, Assemblyman Lou Greenwald’s (D-6), of Voorhees, bill allowing towns to move their April school board election to the November general election passed committee.

The bill, A4394, establishes procedures for districts, municipalities, or voters to independently opt to move the annual school board election to November, and eliminates the vote on school budgets for those districts, except when the budget exceeds the state-mandated tax cap levy.

A 2011 report estimated that, on average, only about 15 percent of New Jersey voters participate in school elections, according to Greenwald, which, along with cost savings, is a major impetus for the bill.

Assemblyman Erik Peterson, (R-23), of Franklin Township, has his own bill, A609, which mandates the school election shift to November, but does not eliminate the budget vote.

That eliminated vote will rile many constituents, said Democratic Assemblyman Herb Conaway, (D-7), of Delanco. “There are some people who will be ticked off about losing their vote,” Conaway said.

Peterson pressed Greenwald, asking whether the budget vote elimination was a way of courting districts to convert to the November schedule.

“It was absolutely an incentive,” Greenwald said, but, “I don’t want this to be perceived that this is losing your opportunity to vote…(Y)ou don’t have to give up that right; it’s a community’s choice.”

The proposal allows for three local options for changeover: by referendum approval, by petition with 15 percent of voters, or by adoption of a resolution by the board of education or the governing body of the municipality. The provides for a four-year “look-back” period in which the election switch cannot be undone by three avenues of action.

Peterson also asked Greenwald why this bill was permissive, as opposed to mandatory.

Greenwald said the bill was stuck in the Legislature for more than two decades, championed by former Assembly Speaker Joe Roberts.

“That was one of the roadblocks for this for 25 years,” Greenwald said, which is why he took a less absolute approach with this measure. “But I think as time moves on, you will see more and more people doing this.”

Assemblyman Sam Thompson, (R-13), of Old Bridge, asked Greenwald whether the bill should codify how the shifting election would shorten or lengthen the preset terms of office, but supported the bill. “This is a long overdue thing,” he said.

The bill passed, 11-1. “This may not be the right fit for every town,” Greenwald said, but, “I believe it will be for the vast majority.” 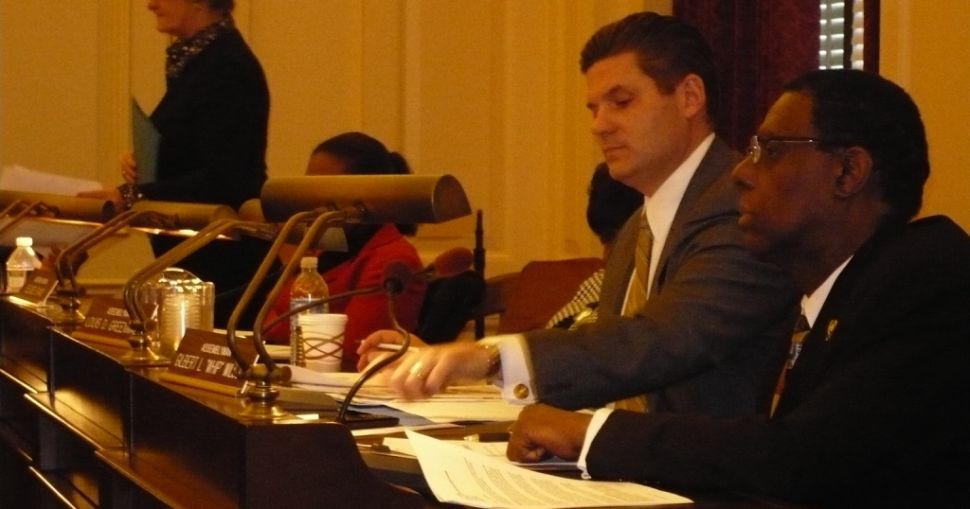