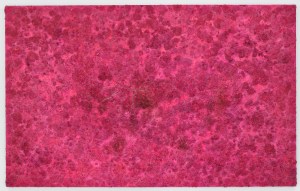 The Pace Gallery certainly knows how to throw a party. Though most Chelsea dealers have jettisoned alcohol from their openings in recent years, the Glimchers have flouted that trend lately, and last night they were dishing out Brooklyn-brand beer and white wine at their reception for Mexican artist Bosco Sodi’s first show with their gallery, at its West 22nd Street location.

The space was packed with people, and every few seconds a cry of “Bosco!” could be heard through the rabble. A dozen works by Mr. Sodi were on the walls–large rectangles and circles colored deep fuchsia or dark aquamarine or black. They have craggy, cracked, barnacle-covered surfaces, like jumbo-sized knock-off Yves Kleins, or spray-painted Styrofoam.

In the show’s news release, Mr. Sodi declares, “When I am making a painting, I don’t stop. I don’t eat, I don’t sleep after the preparations are made and the first layer is put down. It’s a continuous action, like a performance.” The release mentions Pollock, Rothko and de Kooning. The whole package made him sound intense, aggressive, insatiable.

It was a surprise, then, to find–when introduced to Bosco (everyone calls him Bosco) by a colleague–that he was actually laid-back and low key, a nice guy who seemed almost perplexed by his good fortune. He is tall with slightly long scruffy hair, and was wearing a tight sweater over a collared shirt.

Someone had told us that another New York gallery had been competing to show his work, and so we asked him about that, but he demurred. “Marc Glimcher is my kind of guy,” Bosco said with a smile. “We got along right away when he visited me.”

We asked him about how he makes his work, and he explained that he layers on sawdust, pigment and other materials–“layer on layer on layer on layer,” he said, placing his hands one on top of another–in his Red Hook studio, and then leaves it to dry and crack. “It involves chance,” he told us.

“Bosco!” someone called out from behind us, reaching toward him for a hug. “Congratulations!”