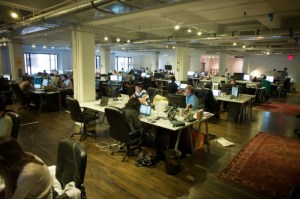 The Code and Theory offices. (Photo courtesy of Design Array)

Peter Brant’s Brant Publications, home to Interview and Art in America magazines, among others, will soon move offices from 575 Broadway to a start-uppy “open-office” space at 110 Greene Street.

The move has Brant Publications swapping offices with the web design firm Code and Theory, which designed the Interview website in 2009, and is expected to be completed within the next few months. The switcheroo means that Mr. Brant is moving his publications from a building he owns to one that, according to PropertyShark, he does not.

Mr. Brant’s publications have had a number of financial stumbles over the past few years, with a Chapter 11 bankruptcy filing for his SP Newsprint Holdings LLC being the most recent.

Due to the move, which is now underway, representatives for Brant Publications were unavailable for comment.