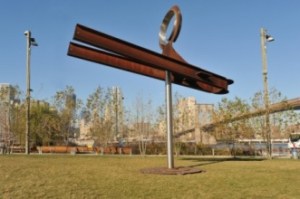 The Storm King Arts Center has installed a 30-foot-tall Mark di Suvero statue called Yoga (1991) at Brooklyn Bridge Park’s Pier 1. According to a news release, the statue represents “the first initiative in an anticipated ongoing arts program there.”

The release goes on to describe the statue:

“The roughly thirty-foot-tall composition is sited on the Bridge View Lawn at the Park’s Pier 1, overlooking the East River. It comprises an I-beam—bent into a U-shape—that rocks and pivots on a stainless-steel pole, itself topped by an O-shaped element. The sculpture creates changing shadows and perspectives as the I-beam variously ‘points’ to the harbor, Brooklyn, Manhattan, Governors Island, and beyond, while the ‘O’ may remind viewers of a ship’s portal or a magnifying glass.”

Update 12/15 An earlier version of this post referred to the statue as not yet having been installed. It’s there now!