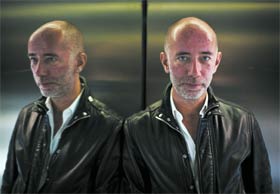 The Financial Times just posted its profile of Carsten Höller, timed to coincide with the opening of the artist’s installation, Double Carousel with Zöllner Stripes, at Rome’s Macro art museum. The article is called “Just Höller” and there are some great moments in it.

First of all, he spends the first portion of the interview wandering around the gallery where his piece is installed. A publicist, who refuses to go and fetch him, tells the writer Mr. Höller is “not hugely media-friendly.” No kidding.

When they finally get to talking, Mr. Höller recommends heading to the roof terrace to get away from a noisy barista, ignoring the exclamations of a museum guard shouting, “It is forbidden to use that exit!”

They talk until the publicist tells them their time is up. The next day, Mr. Höller cancelled all his other press appointments–including the one with the FT photographer–and then quickly decided to go through with them anyway.