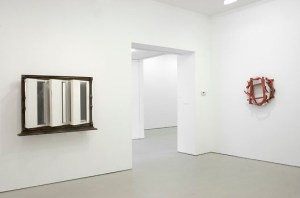 Works by Heather Rowe in the gallery. (Photo courtesy of D'Amelio Terras)

Yesterday, the D’Amelio Terras gallery announced that it would soon shut its doors as partner Lucien Terras leaves to pursue other art world endeavors.

“This is a decision that we made together six months ago,” said partner Christopher D’Amelio. “We waited to say anything about it because we had very strong fall shows that we didn’t want to disrupt, along with Basel Miami.”

The breakup has Mr. D’Amelio taking custody of the gallery’s space at 525 West 22nd Street, along with most of its artists, though Mr. D’Amelio says that the roster may be pared down to a core group that has no other representation. A tighter selection of artists, he added, might also make room for new ones.

In all, Mr. D’Amelio said that he was excited for the opportunity to revitalize the gallery.

“I’m excited for both of us,” he said. “We’re both kind of excited, kind of scared the way you always are with a new opportunity.”