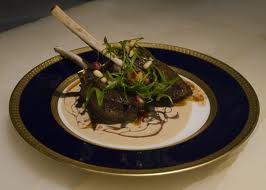 The venison dish served to guests on one of Sadam Hussein's dinnerplates. Courtesy bombsite.com.

On Tuesday this week, U.S. marshals visited Creative Time, the public art organization lead by Anne Pasternak, and took custody of Saddam Hussein’s looted dinner plates. Creative Time had purchased the plates on eBay on behalf of the artist Michael Rakowitz, who used them in a performance piece in which guests were served a “venison-and-date-syrup” dish, prepared by the restaurant Park Avenue Autumn.

The piece was performed in October and November, but by the end of its run, the Iraqi mission to the UN learned of the use of Hussein’s plates. The New York Times‘ Randy Kennedy has the full story:

“Through a series of inquiries that led from its lawyers to the U.N. Security Council to the State Department to the Justice Department, formal notices were sent to the restaurant and then to Creative Time that the plates rightfully belonged to the Iraqi people and should be returned.

“And so on Tuesday morning the china was returned, in a strange but cordial – and, it being an art organization, extensively videotaped – transfer in which Mr. Rakowitz and Creative Time curators helped pack up the plates, which were then driven to the Iraqi mission on the Upper East Side. The plates were then rushed to Washington and handed over to the staff of Iraqi Prime Minister Nuri Kamal al-Maliki, who was in town to meet with President Obama.”

Quite an ordeal for a humble nonprofit art organization to get mixed up in. Read the rest of the story here.