Demi Moore (ne Kutcher) poses the following question, however rhetorically, to the masses. They respond to said rhetorical question the way a hypochondriac takes to peanuts, pollen, or the like: By vomiting excess out into the universe. We are blessed with an abundance of such, but were tasked with finding the best. Please enjoy this exclusive BetaBeat collection of aggregated wisdom for @MrsKutcher. It's the least we could do...for her.
dbrundyobserver

Some people find answers to life's most complex, pressing questions and epic difficulties in the most simple of solutions. For that, we envy them. And also would like to know exactly where they procure their sandwiches.
dbrundyobserver

Often times, the way in is the way out. Like, a door. Or bringing on your new last name early. Which Demi Moore didn't do prior to being married to Ashton Kutcher. But it's worth bringing into the conversational fold regardless.
dbrundyobserver
Advertisement

We're not entirely sure what a 'Coocher' is but surely, somewhere on Urban Dictionary, someone has already minded this issue. We'll move forward with that faith alone.
dbrundyobserver

Sometimes, people in Hell don't need to get out so much as a glass of cold water. This would appear to be that.
dbrundyobserver

It's not an unpopular theory.
dbrundyobserver

Many of Demi's followers suggested that Ms. Kutcher-Moore embrace the name as a personal campaign for autonomy. This seemed to follow in popularity by...
dbrundyobserver
Advertisement

...what seemed to be the second most-popular consensus for @MrsKutcher: That she change her last name to that of the person—usually, male, in their 20s—respectively Tweeting at her. Long Live Mrs. Steve O.
dbrundyobserver 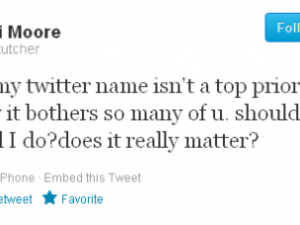 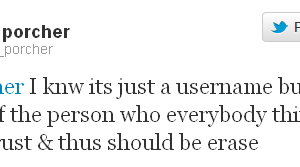 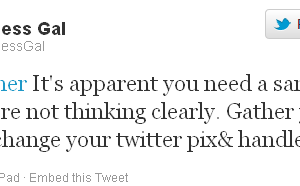 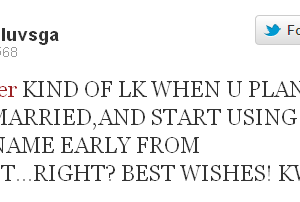 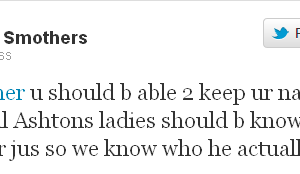 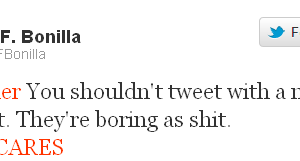 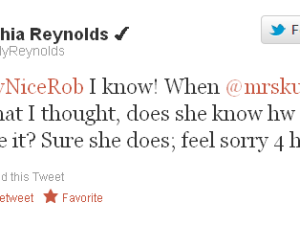 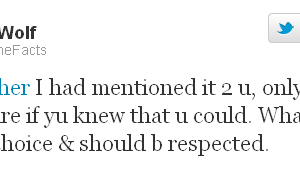 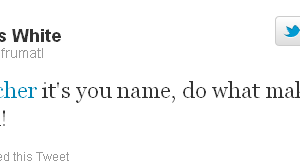 The First Couple of Twitter, Demi Moore (who you may know from the relationship therapy romantic comedy Indecent Proposal, in which she sleeps with a guy for a million Twitter followers) and Ashton Kutcher (who you may know as the actor who sealed his place in the canon of American Thespians with Oscar-winning period drama Dude, Where’s My Car?) recently got a divorce, because Kutcher is a no-good philandering sleazebag lady-seducer, is why. One of the trickier issues of this couple’s divorce, however, is the way Ms. Moore dignified Mr. Kutcher by joining him in digital matrimony…on Twitter…as @MrsKutcher. And if this lady isn’t going to keep John McClane’s last name, why would she keep Kelso’s?

Not a rhetorical question, to us. But to her, it is. Quoteth @MrsKutcher:

changing my twitter name isn’t a top priority right now. sorry it bothers so many of u. should I not tweet until I do?does it really matter?

Funny she should ask (rhetorically). Because a lot of people have a lot of opinions on this. And what are they?

Funny you should ask. Because we’ve put some of the best ones in a slideshow for you. Rather than throw them in a This, folks, is Twitter wisdom at its finest.