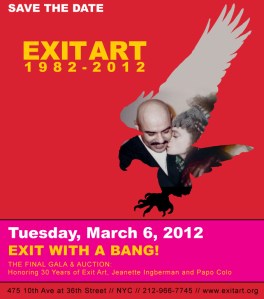 Big changes on the New York alternative-space scene: Exit Art has announced via e-mail that it will close in 2012. Its co-founder, Jeanette Ingberman, died earlier this year, at the age of 59, of cancer.

Over its three-decade existence, the space became known for supporting emerging artists, particularly female and minority artists who were often overlooked by the mainstream art world, and for politically engaged group shows.

In the announcement, Exit Art, which started in SoHo and is now based in Hell’s Kitchen, says that it is planning one final gala for March 6, 2012, to fund a variety of retrospective projects, including an exhibition and book, and “asking its longtime supporters for help in sending us out with a bang.” The details in the e-mail, linked to by Artnet, are as follows:

“This Gala and Auction is being held to raise funds for Exit Art’s “Legacy Project”: a 30-year retrospective exhibition, the publication of a major book on the history of Exit Art, and a properly-funded transfer of the organization’s complete archives to NYU Fales Library Downtown Collection. At Fales, scholars will be able to study Exit Art, its groundbreaking programs, and the thousands of artists who have shown here since 1982.”

More information on the history of Exit Art is available in Ms. Ingberman’s obituary.