As congressional redistricting members prepare to converge at the Heldrich Hotel Monday to forge a map for the next decade, 13th-tiebreaking member John Farmer has laid out no specific public guildelines for how he will choose a winner.

“At this point I am preserving all options, although I would rank drawing my own map as the most remote possibility,” Farmer told PolitickerNJ.com.

When the process ends, conceivably as early as next week, one of the state’s 13 congresspeople will find himself redistricted out of his current seat, a victim of population diminishment.

At least according to his statement, Farmer’s approach is different from that of Rutgers Prof. Alan Rosenthal, who during legislative redistricting earlier this year laid out a specific plan for how he would select a map.

Rosenthal said he wanted to see Democratic and Republican caucus members respectively make two maps that strove to adhere to his principles of compactness and fairness.

If the joint commission couldn’t do that, then he said he would pick the one map that better conformed to his vision. 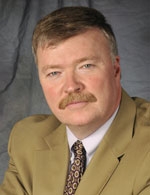