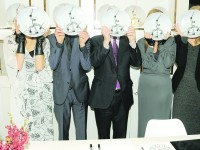 Art fans, plate fans and just a socialite or two hit the Bernardaud store last night for a signing of a special-edition plate designed by Jeff Koons. The second in a series that debuted with Rudolf Stingel, Mr. Koons’ plates drew an impressive crowd that dutifully formed a line around the store as they waited to reach a quick-depleting stack of plates to be signed by the artist, who sat at a table in the middle of the room. Champagne was distributed, for the wait.

Mr. Koons, for his part, is a beer drinker. He kept a pint glass to his right at the table, near a pad where he tested his silver paint pen. He wore a purple suit with a black shirt and tie, black shoes and socks, and is left-handed, like the president.

“Just your name is fine,” said a very tall man in a pinstripe suit. “Just my name?” Mr. Koons said, and pretended to be a man who doesn’t know the value of his own signature. “Are you sure?”

The plate features a black and white image by the photographer George Caddy—bathing suit-clad dancers stacked like cheerleaders on a beach, posed so they formed a shape similar to the peace sign.

“It totally surpassed my expectations,” said Yvonne Force Villareal, co-founder of the Art Production Fund, which received the event’s proceeds, along with the Koons Family Institute and the International Centre for Missing and Exploited Children. “I expected something more direct. Maybe a monkey, or something like that. A Hulk. And he came up with such a refined and intriguing design.”

She grabbed the restaurant designer Adam Tihany as he walked by and introduced him as “the man who made it all happen.”

“That’s right,” Mr. Tihany said and pointed to a nearby plate, indicating the man on the bottom of the pile whose legs make the center of the peace sign. “I’m the one on the bottom, with the legs.” (Actually he’d introduced Ms. Villareal and APF co-founder Doreen Remen to Michel Bernardaud.)

The artist Todd Eberle headed toward the door with seven Bernardaud bags. That must take care of the old Christmas list!