If you’ve seen The Muppets, then you probably already know that the so-called “kid’s movie” is actually propaganda from Democrats, Occupy Wall Street, and those anti-fracking crazies.

Still Fox Business News, apparently not heeding that memo about toning down their political views and leaving the crazy-pants rhetoric to the big boys in Roger Ailes‘ studio, felt the need to make this VERY BLATANT ATTACK ON REPUBLICANS even BLATANT-ER, and dissected every angle of Kermit and Co.’s new adventure as being pro-Obama liberal hogwash. This seven minute segment of outrage is based solely on the fact that the villain in the film is an oil baron named Tex Richman.


Favorite lines:
-“If you want to be fair, why not have a Barney Frank Muppet? Though Barney Frank looks like a Muppet anyway, so that wouldn’t be much of a stretch.”
– “Tex Richman, that’s what the Muppet’s name is, is part of the American Dream.” (Tex Richman is not a Muppet, but the evil oil baron played by Chris Cooper.)
– “Dan, are there any Occupy Wall Street Muppets?”
“There should be!” 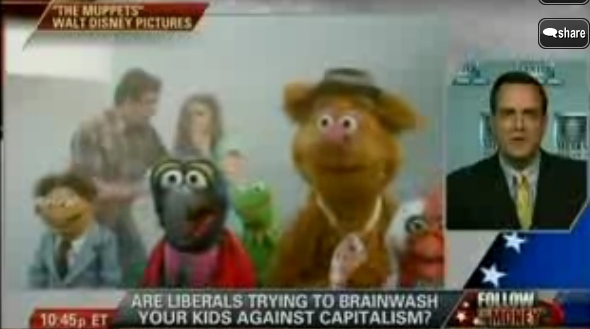