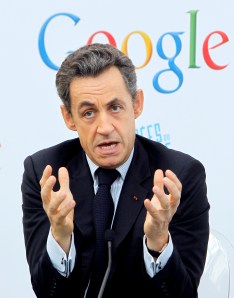 Flipping through this week’s New Yorker, Gallerist was thrilled to find a gorgeous black-and-white full-page photograph by Bettina Rheims showing French President Nicolas Sarkozy smoking a fat cigar. It is a stunner.

We readied ourselves to read the gigantic profile (subscription required, sadly) of Mr. Sarkozy by Philip Gourevitch that the image accompanies, and dove in, only to find this little gem on the opening page, which discusses the president’s somewhat awkward response to a modern art exhibition he attended earlier this year. Here is Mr. Gourevitch:

“This fall, he presided over the opening of an exhibition of modern art that will travel around the country, to be displayed without admission fees. It was an occasion for Sarkozy to be seen mingling with the people, bringing high art to the common man, and, after contemplating a monochrome orange square painted by Yves Klein, he expressed his admiration: ‘That costs millions.’ Then he expressed his wonder: ‘Is a Klein more than a Léger? Less than a Matisse?’ His remarks prompted groans of dismayed mockery in the press.”

While that is a little cringeworthy (though not much more so than most of what was heard coming out of visitors mouths at Art Basel Miami Beach last week), Mr. Gourevitch notes that the president “flouts etiquette so reliably that you can’t call these things gaffes.”