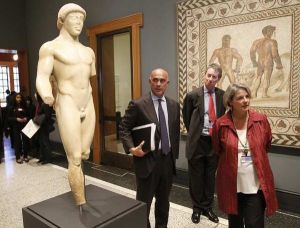 The Getty Museum announced today that its current acting director, David Bomford, will step down from his position on February 1. He was appointed last January after the museum’s last director, Michael Brand, left almost a year before his five-year contract was up.

James Cuno, CEO of the Getty Trust, will assume the position as the museum continues looking for a permanent director. Mr. Bomford, according to a statement, will return to London to work on his writing.

“As a scholar of distinction, it is understandable that David would want to return to research and writing and to do so in England where his family resides,” Mr. Cuno sad in a statement. “We will miss his many contributions as associate director for collections and acting director and we wish him all the best in his new endeavors.”