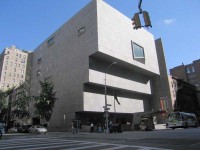 Though the 2010 Whitney Biennial featured no shortage of film-based works, the 2012 edition will feature at least 13 artists that have worked in that medium, along with a handful of artists from the relatively more mainstream section of the filmmaking world, among them Werner Herzog, Frederick Wiseman and Vincent Gallo.

Here are the 13 artists of the 51 known participants who work primarily with film:

The show could host a mini film festival with that roster! Not that we have any insight into what any of them will do. As you may be aware, the list just leaked today.

According to the museum, the film program is being organized in conjunction with alternative space Light Industry’s Ed Halter and Thomas Beard.