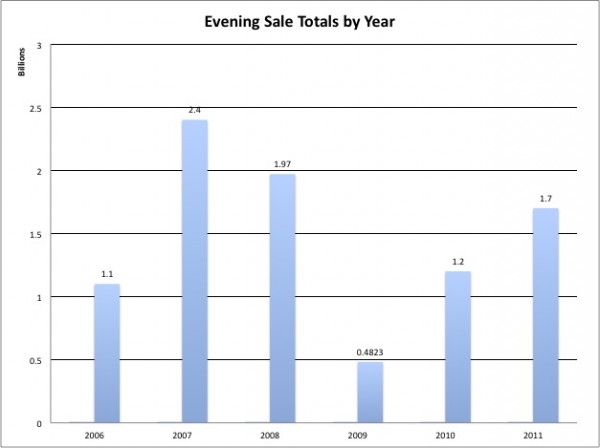 Boom times are almost back. (Data from Sotheby's and Christie's compiled by Bloomberg BusinessWeek, chart by GalleristNY)

Over at Bloomberg, Scott Reyburn calculates that the two major art auction houses, Sotheby’s and Christie’s, sold about $1.7 billion of art in this year’s evening sales, the auctions that typically have the highest-value art on offer. That is a roughly $500 million jump over last year’s total, meaning that, at least at the very upper edge of the art market, collectors are increasingly comfortable shelling out major money for some works (and sellers are comfortable supplying them).

As the graph above shows (which we were able to make, thanks to the fact that Bloomberg has compiled these numbers for the past few years), this year’s total is nearly four times the $482.3 million that the houses totaled in 2009, as the art market contracted along with the worldwide recession.

Still, we are some ways from the all-time high of $2.4 billion that the houses hauled in, in 2007, which is widely viewed as the highest moment point in the recent art market boom. Assuming that the European economy doesn’t completely tank over debt concerns, we just may get up there next year.

Since the opacity of the art market at the dealer level makes it difficult to ascertain the exact health of the broad, international art market, Bloomberg’s indicator seems like one of the better ways of looking at its machinations, at least at the highest level. (A note: one could argue that the proliferation of third-party guarantees at these evening sales—a practice that virtually disappeared during the recession—makes these numbers suspect, but guarantees were common during the boom years, so we’re comfortable with these totals.)

Which house, you may be wondering, won the fight for number one in evening sales? Mr. Reyburn says that Sotheby’s edged out Christie’s ever so slightly in raw numbers, $844.1 million to $834.3 million. Phillips de Pury & Company clocked in at about $208.3 million.