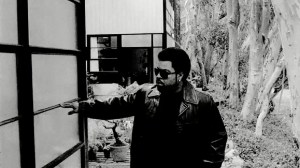 “This is going green 1949-style, bitch,” rapper Ice Cube tells viewers in a new video that the Getty’s “Pacific Standard Time” initiative just released to promote its ongoing series of exhibitions about California art from 1945 to 1980.

Cube is talking about the Eames House, the home and studio that designers Charles and Ray Eames built for themselves in southern California in 1949.

Also making appearances in the promotional video are 5 Torches, which the rapper told The New York Times “is an elegant ‘hood restaurant,” and Simon Rodia’s Watts Towers–“one man’s eyesore is another man’s paradise,” he muses in the video.

The Times‘ interview with the one-time N.W.A. rapper is well worth a read–he also discusses McMansions and his background studying architectural drafting. The video is below.