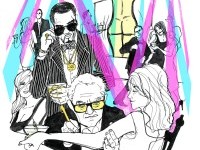 Perhaps you’ve heard that there were parties in Miami last week, rounds upon rounds of antic festivities surrounding the annual Art Basel Miami Beach fair. Perhaps your friend or lover returned home with war stories, aching limbs and a tan. By Friday night a ghoulish element had flitted onto the stage, women limping from soiree to soiree bearing blisters on their feet and stamps on their wrists denoting entry or re-entry to some ear-splitting rave or VIP den, looking for all the world as though they’d been crucified. The hotels along Collins—the Raleigh, the Delano, the Shore Club, the Sagamore, the W, the Shelborne, Soho House—were the seven terraces of Dante’s hell, their entrances heaving with lines of would-be revelers. How could there be so many lost souls and why had they come? It couldn’t be art. Not in these outfits.

But that might have been hunger talking. The past four evenings we’d drifted wraithlike from dinner to dinner, too busy reporting to eat, then nearly passed out at the Rubell Collection one morning because we thought there’d be breakfast but there was instead a food performance and we couldn’t wait for women in white lab coats to give us a baby food jar full of yogurt, and an employee had to take us behind the front desk and feed us a doughnut “from the back” before we lost consciousness.

Friday night we headed to the W Hotel, where P Diddy was to be on hand along with young art dealer Andy Valmorbida, to celebrate a book by Raphael Mazzucco called Culo, devoted to photographs of women’s asses.

The W was the site of many a gathering, from the relatively sedate to a raging blow-out Thursday at a dark, loud venue called Wall. We said to our companion, “Remember? Pyramus and Thisbe? ‘I am a Wall,’” but the words were lost in the din and the press of bodies, reminding us of the year we went to Basel Miami Beach and, listless and distracted, asked everyone we ran into if they knew who James Boswell was, and the one person who did, a dealer, said, “O.K. You be Boswell. I’ll bring my johnson.”

At Wall, we ascended a tabletop that had recently been vacated by Larry Gagosian. Good place for a reporter up here, elevated view, see what everyone’s doing, we told ourselves with conviction, then promptly forgot all that and danced with abandon. From below came the voice of our columnist Adam Lindemann. “You’re shocking me,” he said, above the throbbing soundtrack. You’re not even supposed to be here, we thought back. But we were shocking ourselves, too. Hadn’t we just a short time ago been a bespectacled dork? A frequenter of libraries? Miami with its alchemical humidity had done a number on us.

Whatever. Friday night. At the W’s Mr. Chow we immediately spotted some friends. This could only mean one thing: we weren’t yet at the thing we were meant to observe. Ahead, at the center of the room, bodies were massed. A roadblock, a phalanx through which we’d need to muscle. A woman with a checklist, flanked by security guards, needed us to call the PR, who put us on the first list so he could text her so she could put us on the second list. “Stuck in the middle with you,” said the sound system. We peered into the sea of writhing bodies on the other side of the divide and spotted the grinning mug of dealer Andy Valmorbida, who waved us in.

There was no seat for us, so we took up vigil near the kitchen.

Here is what we observed: Damien Hirst took the arm of his dinner companion, a fetching blonde, and drew on it as P Diddy looked on. Pharrell Williams held court in a red hoodie. Dealer Joe Nahmad hugged P Diddy.

Things became challenging, spacewise, when Chris Bosh, power forward for the Miami Heat, arrived and began powering forward through the room. Oceans of partygoers parted for this enormous man and his diminutive wife. “Can we get much higher?” the sound system asked.

Roberto Cavalli, in helmet of gray hair and dark sunglasses, looked as though he’d stepped off the set of Godfather II. The voluminously bearded Rick Rubin was doing his usual inadvertent Santa Claus. Brandon Davis did his best Brandon Davis. Thierry Guetta, the “artist” known as “Mr. Brainwash,” leaned back in his chair, his arm around art dealer Stellan Holm. Collector Jean Pigozzi, in a shirt with an outrageous print, raised his camera nonchalantly, snapping photos, looking as though he’d been born unimpressed.

Vladimir Restoin Roitfeld was introspective. Or bored. Or both. Stavros Niarchos removed the suit jacket he’d worn over a white V-neck T-shirt, crossed his arms over the broad expanse of his chest and gazed down at the table as though from an empyrean sphere. With a full beard and Thetis at his feet he’d have been a dead ringer for Jupiter in a painting by Ingres.

Presiding over all of this was an ass, a larger-than-life lightbox photograph of a woman in a swimming suit, the rest of whose body was entirely negated by the sheer perfection of her ass. The ass was the genius of this place; not even Mr. Niarchos, the impassive deity, could compete. We saw a man in a suit gaze at the ass photograph, then say something to another man. This was our cue. This was our metier: talking to people who talked about photographs. We waited for a lull in the bodyguard-and-waiter stream; we dashed over.