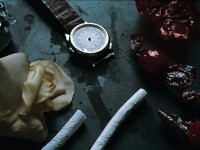 A still from Christian Marclay's "The Clock" (2010). (Courtesy the artist and Paula Cooper Gallery)

There Was a Website Launch, and an Artistic Float

As 2011 draws to a close and myriad writers vie to pinpoint the year’s trends and noteworthy developments, whether those be pernicious or salubrious, let it not escape attention that it was the fall of this year that marked the auspicious launch of The Observer’s new website GalleristNY and its accompanying column in the paper, which you are reading this very minute. We promised to describe to you, with verve, the latest news of the art world in New York and, when relevant, beyond. If our visitor numbers are accurate, we believe we have delivered, and we hope to do even more in the New Year.

And now, per tradition, a highlight of 2011: in early October we found ourselves at the Pulaski Day Parade, the annual Polish-American pride event on Fifth Avenue. We were there to see a float by Polish-American artist Piotr Uklanski, whose artworks are more often found within the posh, sterile confines of places like Gagosian Gallery, which later this month opens an exhibition of Mr. Uklanski’s work on the island of St. Barts, the 1 Percent’s vacation destination of choice. But here was his float—Stanislav Szukalski’s Eagle Monument of 1929, made entirely of white balloons, resting atop a festive red conveyance decorated with spray painted words. On the back: “Boltanski Polanski Uklanski.” On one side: “Amerykanski Uklanski.” On the other side: “Polski Western 2011.” The thing lumbered down Fifth Avenue alongside floats for the Polish Scouting Organization, Laborers Local 78, St. Matthias Roman Catholic Church of Ridgewood and Glendale, a Brooklyn bread shop with a huge, naïve painting of Polish boxer Mariusz Wach. There were women in traditional costume, high school marching bands. It was a crisp fall day. Mayor Bloomberg gave a speech that was translated into Polish. Nothing was for sale except street food, T-shirts, miniature flags. There was no admission fee. —Sarah Douglas


There Were Big (And Small) Screen Thrills

To view three particular video works exhibited in New York this year was to witness what could be a turning point of the medium, and a glimpse at what might come next: Christian Marclay’s The Clock at Paula Cooper Gallery, Laurel Nakadate’s “Only the Lonely” retrospective at MoMA PS1 and Ryan Trecartin’s “Any Ever,” also at PS1. These shows were as poignant for their crossover into popular culture as they were for the quality of the work.

The line outside Paula Cooper Gallery last February was almost as unexpected an endurance test as watching Mr. Marclay’s 24-hour montage of cinematic images edited together in real-time so that they count down the hours, minutes and (sometimes) seconds of a full day. Walking down West 21st Street in February, one doesn’t often find a line out the door late into a Friday night of people waiting for several hours to get inside a gallery. The Clock was one of those rare instances of a work that is both esoteric and universal. It spanned all kinds of cinema, from obscure art house films to golden age Hollywood to popular fodder (pretty much every James Bond film, with some John Cusack and Matthew Broderick thrown in). It was a high concept that was, at its heart, for everybody: we’re all, in the end, living on the same clock.

There’s been some backlash lately about Ms. Nakadate, whose videos often involve nonactors—old male loners—the artist discovered by chance (in the parking lot of a Home Depot; in the elevator of her apartment building). In an interview with New York magazine in December the interviewer mentioned, “You’re also attractive and that bothers people,” to which Ms. Nakadate shot back: “Anybody who attacks me for that is antifeminist.” But the fact that Ms. Nakadate is young and pretty and her subjects are mostly overweight bald men is hardly interesting in and of itself. What Ms. Nakadate does best is blur the line between life and performance (the centerpiece of the show was 365 photographs of the artist crying, or pretending to, on each day of 2010). She calls attention to the inherent exploitation of having a camera lens focused on you, regardless of gender or beauty. For that, the show was more a shattering of what people believe is expected of them when they are being watched. People expected these strange men to take advantage of Ms. Nakadate and not the other way around; or they didn’t expect to hear Ms. Nakadate’s voice kindly ask an adolescent girl to strip to her underwear, as she does in one video. She never does what is expected of her.

Mr. Trecartin’s “Any Ever” was a stressful—and thrilling—bombardment of images, objects, noises and people. His movies are fast-moving, nonlinear and full of lightning-quick edits, as well as references to consumerism and contemporary superficiality that are both funny and unsettling. The range of reactions viewers had to the films—laughter, cringing, horror—was as interesting to watch as the films themselves. There were seven films in the show, but The Re’Search (Re’Search Waits) is likely Mr. Trecartin’s masterpiece (so far). While most of his work stars the artist and his friends in freak-show circus makeup, this 40-minute chef d’oeuvre focuses on a group of young girls, each plotting the other’s demise, between text messages and band practice. They talk endlessly in texting-speak and are unpleasantly sexualized (“You need a new girlfriend?” one particularly young character asks as she is spread out on a bed). Above all, they are violent, and that aggression is a direct function of the consumerism and superficiality that makes up a bulk of the symbolism in Mr. Trecartin’s career (at one point, a character shatters a mirror with a BlackBerry; she, along with everyone else in the film, announces her desire to “murder some fucking father figures”). All of this starts out as vaguely funny in a grotesque way, but as the film continues jumping from frame to frame, Mr. Trecartin’s very style seems to raise the stakes of the patricide into a realm of Greek tragedy—like Oedipus Rex with Twitter. —Michael H. Miller

This year, auction houses continued to deviate from that model of consignment-and-pure-bidding with an ongoing embrace of third-party guarantees and a notable emphasis on private sales.

A successor to what might now be called first-party guarantees, in which the auction house promises a consigner that it will purchase a work for a minimum price if it fails to sell at auction, third-party guarantees are not new, but came into vogue following a dismal fall 2008 auction season in which houses had to buy many works that failed to sell, and for that reason were essentially damaged goods. Art+Auction magazine’s Judd Tully reported this year that Sotheby’s, a public company, lost $52 million in guarantees in the fall of 2008 and that its total guarantees dropped from $626 million in that year to $7 million in 2009.

“These sales are no longer auctions,” an art adviser told The Economist’s Sarah Thornton in the spring of 2011, describing the extent to which work is now presold. The year in New York sales saw high-profile lots like Jeff Koons’s Pink Panther, which sold for $16.8 million at Sotheby’s in May, Andy Warhol’s Nine Gold Marilyns (Reversal Series), which went for $7.9 millionat Phillips de Pury this fall, and Clyfford Still’s 1949-A-No.1, which brought $61.7 million at Sotheby’s in November (those last two on their catalogue covers)—all had guarantees that essentially felt requisite and couldn’t be ignored. The guarantees represented a certain amount of added opacity in auctions, the most transparent part of the art market, relatively speaking, and an area that was already clouded by representative bidders and phone bidding. Since third-party guarantees seem here to stay, many journalists this year asked how the auction game has changed because of them—among them Mr. Tully, Ms. Thornton, Marion Maneker and Felix Salmon.