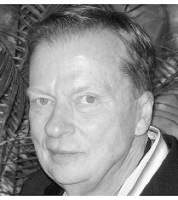 John C. Wessel, a New York art dealer who championed gay artists and work addressing issues of sexual difference, died of ALS, on Dec. 9, according to a notice in The New York Times. (Thank you to Artnet’s Twitter account for linking to the piece.)

Mr. Wessel started his gallery, called Wessel O’Connor, with his future husband William C. O’Connor, in October 1985, in Rome, where they had moved from New York. Operating from the Italian capital, they gave many East Village artists, like Mike Bidlo and Walter Robinson, their first European shows.

After moving back to New York in 1987, Wessel O’Connor organized one-person exhibitions with artists Donald Moffett, Rhonda Zwillinger and George Platt Lynes, as well as group exhibitions that often dealt with issues of identity.

The gallery also became known for showing the work of physique photographers, like Bruce of Los Angeles and Robert Mizer. As William Grimes noted in 1994 in The Times, their “studies of young male body-builders in the late 40’s and 50’s often appeared in digest-size magazines, ostensibly for use by artists.”

In 1990, The Advocate profiled Messrs. Wessel and O’Connor, headlining the piece “Art Dealers Display Brave New World.” The gallery, the article noted, was “one of the world’s few gay art galleries.”

During the course of its long history, the gallery operated out of spaces in TriBeCA, SoHo, Chelsea, Dumbo, Lambertville, N.J., and Doylestown, Penn.

Mr. Wessel served as a Peace Corps member in Venezuela from 1966 to 1968 and worked as a regional representative for the National Endowment for the Arts from 1977 to 1984.