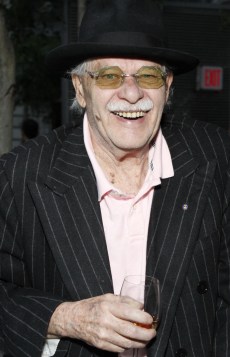 John Chamberlain, a multi-tasking artist who made sculptures out of crushed, often vibrantly painted automobile parts that came to define his career while flouting connections to any single movement or trend, has died. He was 84.

Mr. Chamberlain had been ill for a number of years. Critic Charlie Finch first reported the news on Artnet. An immediate cause of death was not available.

As curator Lynne Cooke has noted, viewers often described Mr. Chamberlain’s hard-wrought automobile-metal work as a sculptural version of gestural Abstract Expressionist painting, his shredded and smashed metal pieces sharing the explosive visual energy of painters like Willem de Kooning and Jackson Pollock, though his work in that style blossomed just as the Ab-Ex movement was fading.

Others likened his approach to the 1960s Pop artists, citing Mr. Chamberlain’s use of commonplace industrial materials, which included not only automobile pieces but also Plexiglas, rubber and foam. He draped fabric over some of his large foam works, generously allowing viewers to recline on them.

The Guggenheim, which gave the artist his first one-person retrospective, in 1971, is preparing another for Feb. 2012, which the artist had been working on up to the time of his death.

Mr. Chamberlain was born in 1927 in Rochester, Indiana. A child of tavern owners, he was raised in Chicago, and served in the U.S. Navy during World War II. After attending the Art Institute of Chicago, he went to Black Mountain College, an avant-garde hotbed in Black Mountain, N.C., in the mid 1950s, where he studied with poets like Charles Olson and Robert Creeley.

After presenting sculptures that were strongly influenced by Abstract Expressionist sculptor David Smith in his first New York exhibition, at Martha Jackson Gallery in 1956, Mr. Chamberlain’s work was included in a number of group shows at the trailblazing Leo Castelli Gallery, on East 77th Street, and he had his first one-person show there in 1962.

Mr. Chamberlain joined the Pace Gallery in 1987, where he showed regularly until jumping to Larry Gagosian’s roster earlier this year, after Pace reportedly balked at purchasing some of his most recent pieces, which he had made with the help of a Belgian fabricator. Mr. Gagosian reportedly visited the artist’s studio and declared, “I want it all.”

Mr. Chamberlain’s work appeared in the 1961 São Paulo Bienal, the 1964 Venice Biennale and the 1973 Whitney Biennial, and is in the collections of scores of museums, including the Museum of Modern Art, the Los Angeles County Museum of Art, the Art Institute of Chicago, Tate Britain, Stedelijk Museum in Amsterdam and MUMOK in Vienna.

Though he only spoke rarely to press, Mr. Chamberlain was known for his irreverent humor. “I once had a drink with Billie Holiday, and I smoked a joint with Louis Armstrong,” he told The New York Times earlier this year. “Those are my real claims to fame. Write that down.”

The artist also resisted efforts to discuss the meaning of his usage of automobile metal, though he admitted to The Times, describing his discovery of its potential: “It was like, God, I finally found an art supply, and it was so cheap it just made you laugh.”