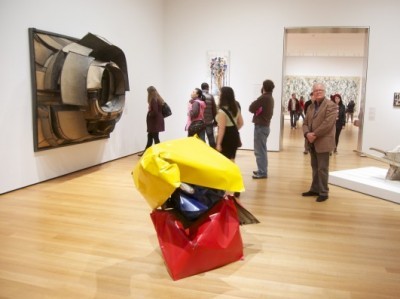 At center, "Tomahawk Nolan" (1965) by John Chamberlain at the Modern, right of a 1961 Lee Bontecou. (Photo by Andrew Russeth)

The day after sculptor John Chamberlain died at the age of 84, gallerist Larry Gagosian, who began representing the artist earlier this year, released a statement, which reads as follows:

“John Chamberlain made an indelible mark on the history of art in the twentieth century. He was a spectacular, roaring figure who embodied the fierceness of mid-century American art and who was unparalleled in his adaptation of unlikely materials for his sculptures. His influence will be long reaching, and his death is a great loss. Our condolences go out to his family and friends.”

Those looking to spend some time with a Chamberlain sculpture in the New York area can head to the Museum of Modern Art’s fourth-floor permanent collection galleries, where the artist’s 1965 Tomahawk Nolan is now on view, not far from a classic Lee Bontecou piece. (An aside: the two artists were in two group shows together at the Leo Castelli Gallery in 1961.) A trove of Mr. Chamberlain’s work is also on view at Dia:Beacon, in Beacon, N.Y.