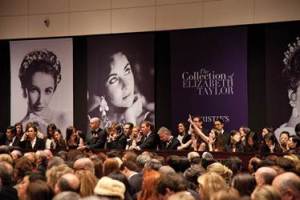 Elizabeth Taylor’s private jewel collection went on the block last night at Christie’s and shattered records. The sale grossed almost $116 million and most lots sold for multiples of their estimates. One lot, a diamond-encrusted tiara that was a gift from Taylor’s husband, Mike Todd, sold for 50 times its high estimate, fetching $4.2 million.

The highlight, however, was lot 12, La Peregrina, a natural pearl, diamond, ruby and cultured pearl necklace by Cartier. An anonymous bidder bought it for $11,842,500 almost three times its high estimate of $3,000,000. It set the world auction record for a pearl jewel. The sale broke seven auction records, according to the house.

And that was only part one. The sale continues tonight with 190 additional jewels and mementos.

For more details on the sale, have a look at Dan Duray’s preview here.