In a stunning reversal of what we’ve seen thus far in the ongoing “Pick a side, become a totally sectarian fanatic about it” Occupy Wall Street debate, the Writers Guild of America-East have written an open letter to both the protesters who crashed their set on December 9th with their own tents, as well as the New York City police who followed suit and shut the whole production down.

The WGA wants you both need to sit down in a corner and think about what you’ve done.

The letter, which was originally found on Deadline Hollywood:

To Occupy Wall Street and the New York Police Department:

The Writers Guild of America, East (WGAE), an affiliate of the AFL-CIO, has strongly and actively supported the Occupy Wall Street movement from its inception. Our union members and staff have participated in many OWS actions, and we have endorsed OWS’ important message that corporate greed and economic inequality are wrong.

So we were disappointed to learn that last week people associated with Occupy Wall Street disrupted the set of an episode of Law & Order: SVU, written and produced by members of the WGAE, and crewed by other entertainment industry union members. The demonstrators’ actions were as misguided and inappropriate as the City of New York’s response – revoking Law & Order’s permit for the shoot and directing the dismantling of its set. Presumably the protesters and police did not set out to achieve a common end but together they prevented the scene from being filmed and the story from being told.

Freedom of speech is freedom of speech, whether it is the OWS demonstrators’ right to peacefully assemble and protest without fear of retribution or Law & Order’s ability to film in the streets of New York and tell its stories without fear of vandalism from protesters or overreaction by the police. New York City has worked very hard to encourage television and film production, and we know it will continue to do so. Everyone who works in the industry supports this, including the Writers Guild, East.

We continue to support Occupy Wall Street’s aims and in the tradition of a city with a long history of upholding the right of free, peaceful speech for all, urge both the members of OWS and the police to treat last week’s occurrence as an isolated incident, vowing that it not be repeated. We would be happy to meet with your representatives at any time to discuss this further. Thank you for your attention.

Oddly, this letter cannot be found on WGA-East’s website: in fact, their homepage is still showing photos from WGAE President Michael Winship‘s  October visit to Zuccotti Park. And there is something slightly ironic about the writers getting mad at OWS for crashing their set, when they were in the middle of shooting a “ripped from the headlines” episode that would be ostensibly about rape and sexual assault in the Occupy camp. (Although OWS was going to be portrayed “sympathetically,” according to the series’ producer Warren Leight, who later deleted that tweet.) 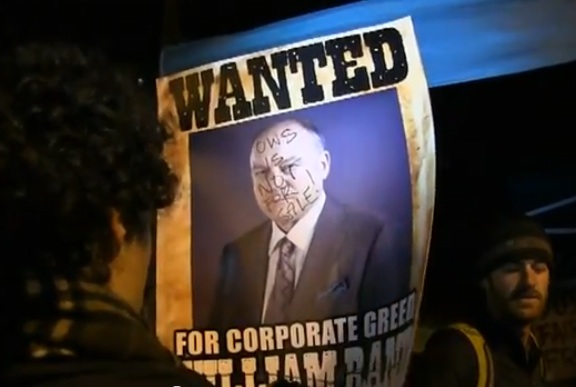