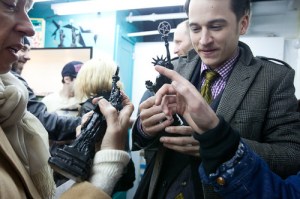 The signing, Mr. Fitzpatrick barely seen at the left. (Photo by Rebecca Smeyne/Paper)

The signing was held in the bright basement that is the OHWOW bookstore in the West Village (Photos here) . “It says, ‘For Dan,'” he said, of the tombstone, when he finished the Sharpie drawing. It did.

We were actually there with The Observer. Could we get quote?

“Yeah, from this guy,” Mr. Fitzpatrick said, and indicated the guy in a black baseball cap and glasses to his left. “Do you know Weirdo Dave? He’s my spokesperson.”

“It’s the book to be right now,” said Weirdo Dave.

And what’s that mean?

“It’s melting all other books out right now.”

Leo, is there a piece that ties the book together for you?

“Mostly the signatures,” he said.

You mean at the front?

“Yeah,” Mr. Fitzpatrick said. “The signatures are kind of the best part of the whole book.”

And what’s Weirdo Dave’s role in all this?

“You know how twins, they finish each other sentences?” Mr. Fitzpatrick said. “I’ll start a sentence and not even come close to finishing—”

“He drinks a beer somewhere,” Weirdo Dave interrupted. “I get drunk somewhere.”

Later, we met a crossdresser who a friend recognized from the Ryan Trecartin Kim Kardashian look-a-like contest in Miami.