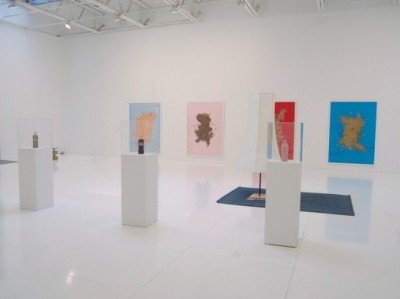 An exhibition of work by Pamela Rosenkranz and Nikolas Gambaroff at Swiss Institute, which moved into Deitch Projects' old Wooster Street space this year. (Andrew Russeth)

Over the past few days, we have been looking back on the year in the art world with a number of year-capping posts. To close out the year, we have collected all of those posts below. Thank you for visiting. We hope to seee you in 2012, on Monday.

It Was a Very Good Year… Sort Of
A reflection from the staff, with predictions for the future.

The Ten Most Expensive Works Sold at Auction
On the year’s auction loot.

The Year in 15 Artworks—and Some Signs—That Feature Text
Glancing at the year through the words that artists wrote and painted and carved.

In Memoriam, 2011
The art world denizens we lost this year, from John Chamberlain to Jeanette Ingberman.

Gallerist‘s Top 25 Posts of 2011
The site’s choicest posts, as measured by total visits.

Some Things We Should Do More of in 2012
More singing, more smelling and a surprise at the Frick, perhaps.