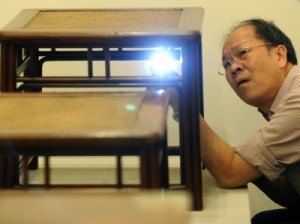 A man inspects a furniture ahead of a China Guardian auction. (Getty Images)

The China Guardian Auctions company will open a satellite office in New York later this month, The Wall Street Journal reports. A major dealer of Chinese antiquities, the three-person office will open at Park Avenue and 59th street.

China Guardian will still focus on finding Chinese artifacts for consignment, and the appeal of a New York office apparently lies in the provenance of pieces found here:

“‘There is a sense of provenance that is very much sought-after,’ said Henry Howard-Sneyd, the vice chairman of Asian art at Sotheby’s. ‘Collectors like to know that pieces were in museum shows over a long period of time—the sense of history and security and authenticity. By selling a piece from a New York collection in New York, you’re very much encompassing that provenance.'”

There’s a juicy kicker too: apparently the house will soon “start researching the market for non-Chinese art.” Stay tuned!