TRENTON – Senate President Stephen Sweeney (D-3) of West Deptford, implored the Senate Budget Committee to release a bill that would make towns share municipal services.  However, various stakeholder groups were opposed to it.

While his wish was granted, he got most of his support from the Republicans. Fellow Democrats Barbara Buono and Paul Sarlo voted no, and Brian Stack abstained. However, Senators Sandra Cunningham, Terea Ruiz, Jeff Van Drew, and Linda Greenstein voted yes.

The bill, S2794, would encourage municipalities to share services, according to recommendations from the state Local Unit Alignment, Reorganization and Consolidation Commission (LUARC), part of the Department of Community Affairs. If not agreed to, the town refusing to share services with another town would be penalized by having their state aid withheld.

“We talk about property taxes a lot in this state and how high they are…Time after time, local governments have decided not to (take advantage of money-saving opportunities).”

“People like to say this is my town….but we can’t afford that anymore. We have to look at the way we spend money…We have to find ways to save money.”

League of Municipalities Executive Director William Dressel, however, said while he supports the concept of the bill, he is ultimately opposed to it. He said the taxpayers of a town shouldn’t be punished if they don’t want to share services, just because some “bureaucratic agency in Trenton” believes it’s best for them to do so.

Other mayors echoed his sentiments.

“Voters would be threatened,” he said.

He told Sweeney, “I urge you to hold this up.”

Another mayor, Colleen Mahr of Fanwood, said the bill is akin to putting a “gun to the heads of the members of the governing body.”

However, Sweeney said the perceptions from the mayors are inaccurate, and the revised bill addresses the big hurdles, elimination of civil service protections and golden parachutes.

“We moved a lot of the major barriers,” he said.

The Communications Workers of America said that if civil service is eliminated, then new hires could be the result of cronyism.

The AFL-CIO also was opposed to the bill because of the civil service opt-out provision that could lead to layoffs.

Only about one-third of New Jersey’s towns are civil-service towns. Gov. Chris Christie has called for reforming the system.

Sen. Joe Pennachio described this bill as “a baby step in the right direction.”

Sen. Steve Oroho said while he had some concerns, “I want to move the process along.”

Sarlo voted no, despite praising Sweeney for the bill, saying he wants to respect the will of the people. 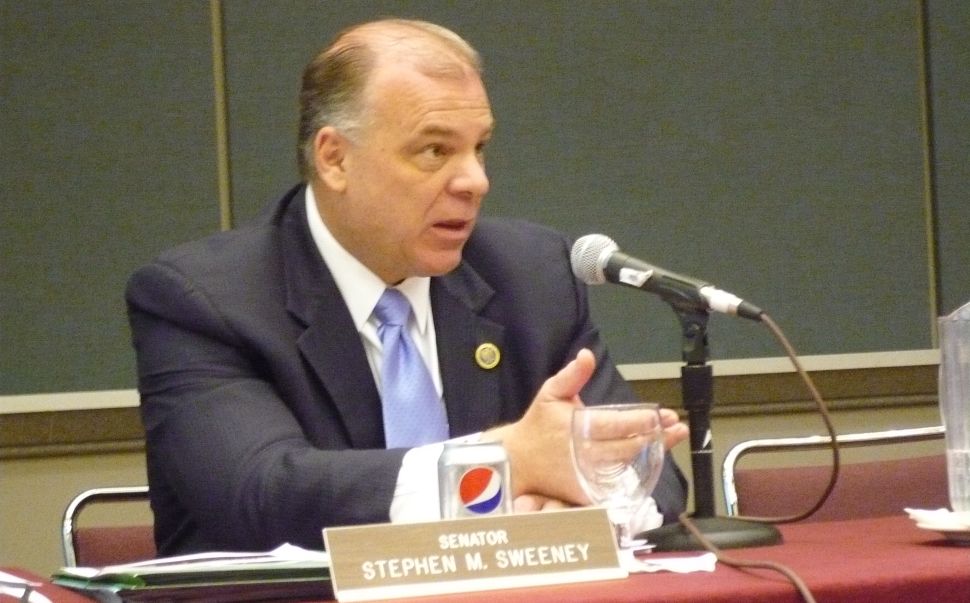