William Mennen, who declared his candidacy for the 16th Legislative District Assembly seat held by Peter Biondi before his death, has bowed out of the race, a source with knowledge of his intentions told PolitickerNJ.

Donna Simon of Readington Township has announced her intent to run for the spot.

South Brunswick Health Board member John Saccenti and GOP operative and businessman Bill Spadea have alse declared their intent to run for the seat. Currently the seat is held by Jack Ciattarelli, who was on the ticket alongside Biondi, but was appointed to fill the vacant seat when Biondi died.

From the start of their fledgling contest, Spadea hounded Mennen on the residency question.

A resident of Tewksbury, Mennen at first said he intended to move into the newly configured 16th District, but faced potential obstacles, including the threat of a legal challenge from the Spadea camp.

Ultimately it was just too much family upheaval.

“I wasn’t prepared to take the apartment and go by myself,” Mennen told PolitickerNJ.com. “I dismissed not moving. It didn’t pass my own personal sniff test. And I didn’t want to leave my family behind. It would just be too much of a burden for my family to bear.”

Sources have told PolitickerNJ that the 16th District seat is slated to be filled by a candidate from Hunterdon County as a result of a deal cut after the legislative reidstricting process, but Spadea and Saccenti have other ideas. 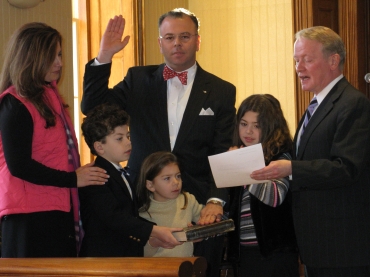