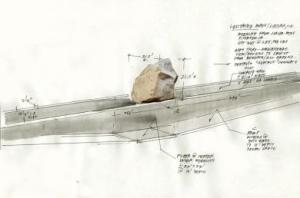 Little progress has been made in the efforts to move Michael Heizer’s 340-ton boulder sculpture Levitated Mass, which resides in Riverside, Calif., to the Los Angeles County Museum of Art, where it is set to be installed, The New York Times reports.

Adam Nagourney, who detailed the piece in October and at that time noted that it was supposed to be installed at the end of November, says that delays on the piece’s installation have now moved into the new year. The problem? The massive rock must be transported through 21 towns en route to LACMA, meaning that negotiating its shipping involves deals with municipal governments. Here is The Times:

“They are very nice,” [LACMA director Michael] Govan said, referring to those cities and the officials who run them. “I’ve gotten to know them all. The roads are nice.”

Much of the citizen outrage, where it exists, is documented via comments on the LACMA blog.